Dan McCarthy gave a talk to stu­dents and faculty on Sept. 5 titled “Nation­alism and the Future of Con­ser­vatism.” Mr. McCarthy is the editor of Modern Age, a con­ser­v­ative journal pub­lished by the Inter­col­le­giate Studies Institute. He also con­tributes to a variety of pub­li­ca­tions including the New York Times and USA Today.

I think a classics back­ground is very valuable for a jour­nalist or anyone who works with lan­guage because it gives you insights into your own lan­guage that you wouldn’t expect to get from an acquain­tance with Greek and Latin. Super­fi­cially it enriches vocab­ulary, but it really teaches you about the structure of lan­guage in a way that very little English instruction does nowadays. The parts of speech, the ways verbs and nouns interact — basic con­sid­er­a­tions which are almost sub­con­scious to a native English speaker — become things you think about con­sciously when you’re working with a foreign lan­guage. And then of course the access to the Great Tra­dition that is pro­vided by Greek and Latin is invaluable. There’s no sub­stitute for reading these works in their original lan­guages. My edu­cation informs my reading and writing but isn’t really some­thing I display for the sake of impressing people. I try to let it influence my style of thought as opposed to inserting a Latin phrase or a citation by a famous philosopher into every essay.

You worked as internet com­mu­ni­ca­tions coor­di­nator for the Ron Paul pres­i­dential cam­paign in 2008. How has the political atmos­phere changed since then?

In 2008, nothing was quite as dra­matic as what we see today. In terms of the angry rhetoric, I think the source of that was a great feeling of betrayal among the American public with respect to America’s lead­ership of both parties. And when you have a can­didate like Donald Trump — or Bernie Sanders, for that matter — come along and be very blunt about expressing that frus­tration and anger, it res­onates with a lot of people. It expresses how they’ve felt for a very long time. I think the political lead­ership of both parties sup­pressed a number of issues for a decade or more and as a result were not aware of just how deeply the dis­content was felt among the American public. Rhetor­i­cally there was also this ten­dency for politi­cians to use sound­bites and say very little while sig­naling to their base and getting people to support them without really engaging in pol­itics, and that upset people. That kind of highly pol­ished rhetoric has given away to a much franker con­ver­sation now. Even though it may be angry and sort of dis­turbing to people at some level, it’s actually a more truthful style of political dis­course than what we had a decade ago.

What does nation­alism mean to you?

Nation­alism is an extremely pow­erful force that can take good forms or bad forms depending on the con­di­tions of a country and the kind of leaders you have. It’s a term that often frightens people. They think of Nazi Germany or WWI and the clash of dif­ferent nation­al­ities that led to that con­flict, but I think nation­alism is the most nec­essary and yet incon­ve­nient term to describe what’s hap­pening in American pol­itics right now. There’s this desire to reassert the idea of America as a nation-state with a dis­tinct cit­i­zenry with dis­tinct interests, not simply the idea that America is part of a global system and has to advance that system through activist mil­itary efforts abroad and through the cre­ation of inter­na­tional eco­nomic freedoms. There’s a sequence of loy­alties that we should keep in mind: first of America’s cit­izens, second of its allies, and third of the larger, global com­munity. That had fallen by the wayside during the heyday of NAFTA and global trade agree­ments. All of these things were about building a system rather than fighting for the advan­tages and the well-being of the American cit­i­zenry. And the American elite has not accepted or adapted to this new political dis­pen­sation. They’re still stuck in the glob­al­ization pol­itics of 1999. The nation­alism I’m talking about is pro-American and has nothing to do with the neg­ative asso­ci­a­tions people have. One reason why we need to have a respon­sible, good, con­ser­v­ative form of nation­alism today is because if we don’t, the pres­sures that create nation­alism in the first place won’t go away. They’ll still exist, but they’ll simply be taken advantage of someone on the left or by an insane sort of nation­alist.

I think patri­otism is a broad feeling of love for one’s own country, and nation­alism is more spe­cific because it’s about a par­ticular program that seeks to advance the interests of your country as a nation-state. One reason I don’t like to use patri­otism as a political term is because it sug­gests that everyone who’s not on your side isn’t patriotic and I don’t think that’s true. People can be patriotic and love their country and still have ideas that are very wrong. But to say that someone isn’t a nation­alist is not to pass judgement on whether they love their country or not, it’s simply to say they don’t see national interest in the terms that people who do identify as nation­alists see it.

Obvi­ously, the focus of your work is on American pol­itics, but what role do you think nation­alism plays in Brexit in the United Kingdom?

I think there’s a strong par­allel between Brexit and the Trump phe­nomenon. Both of these devel­op­ments took place in 2016 and for the same reasons: you had a political elite and a very mis­placed faith in a world system that was transna­tional. They put all their efforts toward building the system and per­fecting the European Union instead of looking out for dif­ferent sectors of Britain’s own society. Both in the UK and the United States there was this ten­dency for high finance to dictate policies and to think that as long as the stock markets were happy and con­sumer prices were low, every­thing would be fine. But, in fact, we found that people had very serious con­cerns about whether their own lines of work would be elim­i­nated by foreign com­pe­tition and changes in tech­nology. They worried a great deal about whether their children would inherit an economy that would have space for them to live and grow or if it would be divided into the haves and have-nots. That’s why in British pol­itics you saw an inter­esting con­junction where some bor­derline socialists sup­ported Brexit as much as the right-of-center people sup­ported it. It cut across tra­di­tional party lines in the same way that Donald Trump did.

Do you think the media is so far-gone that con­ser­v­ative jour­nalists should abandon it, or should they stay in the trenches and try to reform it from within?

I don’t think anyone should fear that if they are con­ser­v­ative or strongly reli­gious they have no career in jour­nalism. There is, however, an increasing divide between so-called main­stream jour­nalism and con­ser­v­a­tives. Legacy media outlets like the Wash­ington Post and New York Times are starting to edi­to­ri­alize on the front page. The pres­ident makes a statement and they don’t just report on the statement, they report on what they think the statement really means based on what liberal activists on Twitter insist it must mean. I think that’s very trou­bling. A con­ser­v­ative in main­stream jour­nalism should be pre­pared to feel a little iso­lated. You don’t want to be paranoid or sus­pi­cious, but be aware that those around you might have no under­standing what­soever of where you’re coming from and make incorrect assump­tions that you’re a bigoted, hateful person. On the other hand, you don’t want to sur­render your own prin­ciples and ideals to fit in with everyone else. You do see people who have a con­ser­v­ative back­ground and go into main­stream jour­nalism and become indis­tin­guishable from the lib­erals around them. It’s a very tough path to walk, but that’s what makes it worth­while. You have to know what your appetite for risk and adversity is and have courage. That’s some­thing the country can never do without, but at this point courage is a necessity. It can’t just be rel­e­gated to sol­diers; everyday cit­izens have to have courage as well.

What advice do you have for Hillsdale stu­dents in general?

Cherish your studies while you have the oppor­tunity. This is a time in your life when you’re expected to read great books. Never look at it as a classroom assignment. When you’re much older you’re going to wish you had the free time to read the Iliad and Shake­speare and right now you not only have the free time but are expected to study these things. Take advantage of that and enjoy it. Make it part of your char­acter. Inter­nalize what you get from these great texts. This is the moment to attain that for­mative edu­cation which will provide you with the kind of ver­sa­tility that you need not only in jour­nalism but throughout American life in the 21st century. 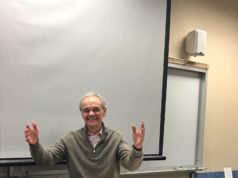