How would you live if you knew you were dying?

The 2019 doc­u­mentary “The Long Goodbye: The Kara Tip­petts Story” sets out to make us con­sider our own answer to this question. It moves us to con­sider how we should live in light of pain and death, and even puts forward a vision of beauty in the midst of suf­fering.

Kara Tip­petts — a pastor’s wife and mother from Col­orado — was known in the evan­gelical Christian com­munity for her blog, “Mundane Faith­fulness.” But shortly after starting what she called her “mommy blog,” Tip­petts was diag­nosed with cancer in July 2012. She died of breast cancer in March 2015. The doc­u­mentary follows Tip­petts in the last years of her life, telling her story of suf­fering through footage and inter­views with her family and their friends.

The film opens with a clip in which Tip­petts ponders her illness.

“What if instead of being angry at life, what if you learned some­thing of love today?” she asks. “Why is it that we withhold love?”

And with that, the audience is brought into the everyday life of Tip­petts, her husband, and their four children as they nav­igate a world in which their wife and mother is slowly dying. Director Jay Lyons moves us to empathize, as best we can, with Tip­petts and those closest to her.

In one par­tic­u­larly tear-inducing scene, Tip­petts’ husband, Jason, sitting on the bed with his wife, says she “always loved whoever was in front of her.” To this, Tip­petts says quietly to her husband, “You’re talking about me in the past tense.”

Inter­spersed with scenes like this that show Tip­petts’ suf­fering — such as her long, blonde hair being shaved away — we get glimpses of how the family and friends cope with this “long goodbye” to Tip­petts.

Watching this doc­u­mentary with my mother was poignant for me. Her family has a history of cancer, and her mother died of it after a 16-year battle. In many ways, my mother said, she iden­tified with Tip­petts’ children, as she grew up with the reality of her mom’s illness. Because of this, Tippett’s story wasn’t just about some American family to me; it wasn’t just “those people.” This easily could be my own family, and in some ways, it had been my mother’s.

The film con­stantly empha­sizes the impor­tance of today, of the present moment. In our culture of dis­tracting tech­nology and ever-full schedules, it is a nec­essary reminder of the impor­tance of living in the present. Tip­petts shows how her pain clar­ifies this truth — knowing she’s dying allows her to appre­ciate ordinary moments with her family of six all the more.

“I know that I love today, and I have today to go love another,” she said.

Tip­petts and her husband even go so far as to call her cancer a “gift that exposed to us what’s important, what’s valuable.” This coun­ter­in­tu­itive view on suf­fering ulti­mately comes from the couple’s faith in God.

“The world says I should be angry, that I should be shaking my fist at God,” Tip­petts said, adding that suf­fering is not a mistake. “[God is] present in pain.”

But living a Christian life in the midst of suf­fering isn’t so easy. In an interview, Tip­petts recounts one night she was strug­gling, right after she received a new cancer diag­nosis. She remembers weeping while reading Phillip­pians 1.

“Lord, I don’t know if I believe you when you say to die is gain,” she said. “Do you believe to live is Christ?”

Tip­petts reflects on her cancer as just one facet of her rela­tionship with her heavenly Father, and she finds herself forced to wrestle with reality.

“I feel like I’m a little girl at a party whose dad’s asking her to leave early, and I’m throwing a fit,” she said. “I’m not afraid of dying. I just don’t want to go.”

In an iron­i­cally beau­tiful way, it’s this struggle of doubt in the midst of her suf­fering which leads Tip­petts into a deeper rela­tionship with God. Not every­thing is easy, she says, and that’s OK.

“It shows me that I’m needy,” Tip­petts said. “I’m so needy for Jesus to walk with me through these last days, these last moments.”

Tip­petts rejects the American notion that “we have to win and be better,” that we somehow have to beat pain to be suc­cessful. We’re all dying, she says, but the dif­ference is she’s told that every day. Pain, espe­cially on a small scale, has a role in our friend­ships, in our romances, in our bonds with family. Tip­petts reminds the viewer that love of any kind requires sac­rifice.

“If we’re sup­posed to love more today than we did yes­terday, we have to get uncom­fortable.”

‘Fyre: The Greatest Party That Never Happened’: New documentary goes behind the scenes of the fiasco 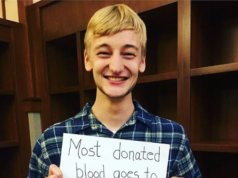 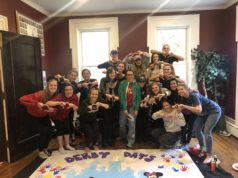