An average of 90% of all shelter animals in Michigan are not killed or euth­a­nized.

The Michigan Pet Fund Alliance announced in their 2018 Michigan Shelter Live Release Report that most of the state’s animal shelters are con­sidered “no-kill,” meaning that 90% of all the animals being brought to shelters are adopted, returned to their owners, or trans­ferred to another facility. This is some­thing Deborah Schutt, founder and chair of the MPFA, has worked toward for years.

“Twenty years ago, we had the dog catcher. The phi­losophy was to catch and kill; that’s what most shelters did,” Schutt said.

Michigan is now the second state to be con­sidered no-kill after Delaware. Delaware, however, has only three animal shelters com­pared to Michigan’s 174.

Over the last 10 years, groups across the U.S. have been working for the goal of getting animal shelters to no-kill status, according to Schutt.

Schutt said a rate of 90% live releases is a good indi­cator for whether animal shelters are han­dling animals well.

When it comes to the data MPFA used in its latest study, Schutt said shelters are required by law to submit those numbers to the Michigan Department of Agri­culture and Rural Devel­opment.

“[The form] includes how many animals are saved, how many are brought in, how many cats and dogs, and whether they’re in there over or less than six months,” Schutt said. “They have to do that every year.”

While there has never been a national con­sensus as to def­i­n­i­tions, Schutt draws a dis­tinction between killing and euth­a­nizing shelter animals. When a “healthy and treatable” animal is put down, that should be con­sidered killing an animal, she said. Euthanasia is “an act of mercy to end suf­fering.”

For a small per­centage of shelter animals, their behavior may be so bad that they can’t be saved. For other animals, they might have untreatable health issues such as cancer, in which case it’s more humane to euth­anize the animal.

According to the MPFA’s study, Hillsdale County had a 97% live release rate last year, only down 2% from their 2017 rates. This means that only 3% of shelter animals total are put down in the county.

Jill Richardson, manager for the Greater Hillsdale Humane Society, said they have always been a no-kill shelter. She noted that euthanasia ser­vices aren’t even offered since they don’t have a vet­eri­narian on staff. The shelter’s intake has been about the same, she said, so the state’s des­ig­nation of no-kill hasn’t changed things for them.

Richardson said she thinks animals need more time ini­tially to adjust to a shelter before employees decide to put them down. Per­sonally, she believes shelters should give animals a week of adjusting before any deci­sions are made.

“A dog or cat is always fearful when they first get in. Going by their first reaction is not fair to the animal,” she said. “They need to see people every day and interact every day.”

Hillsdale sophomore Danielle Bagenski, the humane society GOAL leader, echoed Richardson’s point about the GHHS having no-kill shelters. Because they don’t euth­anize animals, however, the problem they might have to deal with is over­crowding.

“A way to combat this issue, and some­thing both of our local shelters take part in, is working with other shelters throughout the state to ensure that these aban­doned and neglected animals can find happy and safe homes,” Bagenski said in an email.

When shelters have these kinds of rela­tion­ships, she said, it proves that it’s pos­sible for animals to be adopted and that shelters don’t have to resort to putting down their animals.

Bagenski said Michigan can be an example to other states of how to value the well-being of animals. She said the no-kill des­ig­nation doesn’t mean animals are “getting adopted out to random fam­ilies.”

“The first pri­ority is always an animal’s safety, which is why shelters have spe­cific pro­ce­dures in place to ensure animals are getting adopted into safe homes,” Bagenski said. 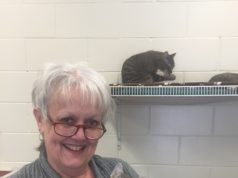