Newton’s Third Law of Motion says every action has an equal and opposite reaction. We are taught this is merely a law of physics. Yet, it is quickly becoming a law of American pol­itics.

A trend has emerged where a sudden and radical change in one party is met with an equally abrasive and extreme reaction by the oppo­sition.

In 1980, after Ronald Reagan’s election made con­ser­vatism main­stream, Democrats rallied behind lib­erals like Ted Kennedy and Walter Mondale. The Clinton Administration’s early attempts at uni­versal healthcare reform and a pro­gressive agenda ran into Newt Gin­grich and the Repub­lican Rev­o­lution in the 1994 midterms. And in 2010, the Tea Party movement emerged as a fearsome political force in response to Democrats pushing the maligned eco­nomic stimulus bill and Affordable Care Act.

When one party steers left, the other steers right, and vice versa.

Today, this cycle repeats itself with the Trump admin­is­tration and Con­gres­sional Democrats. Pres­ident Donald Trump’s reshaping of the Repub­lican Party trig­gered the ele­vation of socialist fire­brands such as Alexandria Ocasio-Cortez, D‑N.Y. A new strand of the Demo­c­ratic Party has emerged with the fire of the anti-Trump movement.

If the Demo­c­ratic Party plans on reclaiming the White House in 2020, they must imme­di­ately cease enter­taining the notion of impeachment pro­ceedings.

If history tells us any­thing, that equal and opposite reaction usually results in dis­aster for the second actor.

Ronald Reagan clob­bered Walter Mondale and the leftward-drifting Democrats in 1984 with a land­slide victory for the ages. After the Repub­lican Rev­o­lution, the Con­gres­sional GOP over­played its hand with the gov­ernment shutdown in 1995, vir­tually handing Bill Clinton a second term. And in 2011, public opinion soured for the new Repub­lican majority in the House after the Tea Party pushed the country to the brink of defaulting on our loans during budget talks with the pres­ident. A year later, Barack Obama cruised to reelection despite a weak economy, soaring deficits, and a subpar approval rating.

The American people don’t like Donald Trump. To say his pres­i­dency is polar­izing is putting it mildly. FiveThir­tyEight puts his aggregate approval rating at 41% com­pared to a dis­ap­proval rate of 53%. Any Repub­lican who tells you that Trump is invin­cible or posi­tioned well for reelection is either lying or ill-informed. Trump is vul­nerable and beatable.

But if there is one thing even more unpopular than the current pres­ident, it’s the idea of Con­gress taking it upon them­selves to throw him out. Almost 60 percent of Amer­icans oppose impeaching Trump, with only 40% backing the idea, according to a Mon­mouth Uni­versity survey.

While most Demo­c­ratic pres­i­dential front-runners lead Trump head-to-head in the polls, Ocasio-Cortez, arguably the most vocal pro­ponent of impeaching the pres­ident, suf­fered a dive in her favor­ables with her national approvals 13 points under­water.

Some Democrats argue that pushing impeachment pro­ceedings is nec­essary to motivate their base to turn out in 2020. In other words, if you don’t feed your fans, they will leave. And they are correct to rec­ognize the impor­tance of turning out one’s base in November.

This, however, is a colossal mis­reading of the current political land­scape.

The Trump cam­paign is already fighting at a severe political dis­ad­vantage heading into 2020. One for­gotten fact about the 2016 race is that Trump received a smaller share of the vote than Mitt Romney in 2012. Trump fin­ished with 46.1% of the popular vote, com­pared to Romney who clocked in at 47.2%. Had it not been for the his­tor­i­cally inept can­didacy of Hillary Clinton pre­senting voters with the choice of spoiled milk or rotten eggs, Trump would still be hosting “The Apprentice.”

Trump not only has to hold down his voting bloc from 2016 but will likely need to expand his tent to Inde­pen­dents. If the Demo­c­ratic Party has a shred of common sense, they’ll pri­or­itize denying him those inde­pendent voters and pursue a more con­cil­iatory political pitch rather than a base versus base, mano-a-mano strategy.

We will soon know whether or not Democrats will be able to sup­press their emo­tional disdain toward Trump with a rational political strategy or if they will succumb to the temp­tation of impeachment. If they can resist the urge to respond to Trump with their own version of erratic gov­er­nance and behavior, the Demo­c­ratic Party will sit in a com­fortable position to reclaim the White House in 2020.

But if they cater to their fringe, they will quite pos­sibly punch the ticket to four more years of a Trump White House. 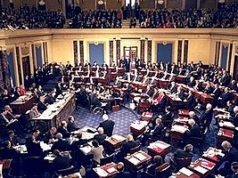