On Sept. 12, the Hillsdale Garden Club cel­e­brated its 90th anniversary in Markel Audi­torium. Tables loaded with deli­cious treats and a com­mem­o­rative cake stood in the lobby, and ladies in pink sweaters milled around with cups of lemonade, laughing and chatting away.

“We like a reason to dress up and get out of our rubber gloves and jeans,” Lopresto added.

They may like to party, but the 60 active members of the Garden Club def­i­nitely aren’t afraid of getting their hands dirty.

“We do a lot,” Worms said. “All the petunia baskets that are hanging on the light posts downtown, we plant those, and the city hangs them and waters them for us.”

This season will be a busy one for the club, which puts on a Green Sale after Thanks­giving each year to sell handmade wreaths to the com­munity. In fact, Lopresto said they started preparing for the sale last week.

The focus of the night was a highly-antic­i­pated speech from Jan Bills, founder of her land­scape company Two Women and a Hoe and author of “Late Bloomer: How to Garden with Comfort, Ease, and Sim­plicity in the Second Half of Life.”

“Bills brings so much humor to gar­dening and she really brings out its light side,” Lopresto said.

The heavy side of gar­dening involves “hard work and shovels,” as Worms and Lopresto laugh­ingly added.

Laughter was in ready supply throughout the evening, thanks to Bill’s hilarious and infor­mative pre­sen­tation. She quizzed the audience on the dif­ference between “lush” and “over­grown,” revealed her go-to sup­plier for card­board — the Costco toilet paper aisle — and pro­vided the “Five Deadly Sins of the Garden,” which is a short list of invasive weeds that will destroy any flower bed.

“If you see these plants, run,” she joked.

Bills seemed well-acquainted with the struggles of gar­dening.

“So, gar­deners, wouldn’t you agree that if you woke up in the morning, and some­thing didn’t hurt, you’d think you were dead,” she asked.

The chuckles from the audience revealed that it was all too true.

In addition to her handy lists and relatable humor, Bills’ talk was full of tips, tricks, bug-spray recipes, and examples of what not to do in the garden. One piece of advice that she returned to again and again was her mantra “right plant, right place.”

“This is critical if we want to sustain the garden and the gar­dener,” she said, sup­plying photos of over­grown hedges obscuring living-room windows to prove her point.

Besides Bills, the night’s program included a talk on Garden Club history by Worms, an overview of the Green Sale by Connie Brum­baugh, and a history of Mrs. Stock’s Park –– the garden that started it all –– by Sally Fallon. Together, they dis­played the extent of the impact that the Garden Club has on the Hillsdale com­munity.

Mayor Adam Stockford expressed his grat­itude to the Garden Club in a brief speech com­paring the Club members’ active role in the com­munity to the self-reliance and can-do attitude that Toc­queville observed in Amer­icans over 200 years ago.

“Where would this com­munity be without the Hillsdale Garden Club,” he asked.

“This mile­stone is truly a cel­e­bration of the many years that the Hillsdale Garden Club beau­tified the com­munity by enriching the lives of those who live here,” Leutheuser said. “All its members know the admi­ration we have for their work and carry with them our warmest wishes for the future.”

To round off the night, members of the Hillsdale County Board of Realtors pre­sented the Garden Club with a check for $1,500 to go towards the pur­chase of benches and picnic tables for Mrs. Stock’s Park.

“It’ll give them a chance to sit and relax when they’re doing all that weeding,” a rep­re­sen­tative from the Board of Realtors said.

All in all, it was an evening to remember for the members of the Hillsdale Garden Club. As they drifted back into the lobby, laughing with their friends and nib­bling on cake, these ladies looked ready to take on the season, from Christmas wreaths to obnoxious weeds. 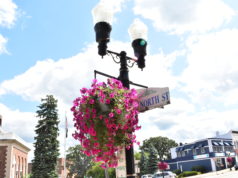 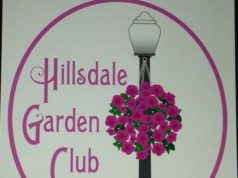