Fourteen years ago, my family flew to China to adopt my younger brother. It was a surreal expe­rience, to say the least, even for an 8‑year old: The cold absence of liberty and basic freedoms in Beijing was as chilling as a January night in Hillsdale.

But one city we visited in China stood out from the rest: Hong Kong. After spending a week on the mainland, where mil­itary guards greeted my family with sus­pi­cious glances and whispers, and people went about their day with dark clouds hanging over them, I imme­di­ately sensed the dif­ference between Hong Kong, a city forged in freedom, and Beijing, a gloomy metropolis cobbled together by an oppressive regime.

One source of pride for the people of Hong Kong is the Lion Rock Spirit. Orig­i­nating from a 1970s tele­vision drama, the motto expresses the sol­i­darity and per­se­verance of Hongkongers. Despite the destruction brought upon the city during World War II and the looming com­munist giant to their north, the people of Hong Kong endured and trans­formed their city into a beacon of oppor­tunity and eco­nomic growth for all of Asia. In so doing, the Lion Rock Spirit has become a source of cul­tural identity and pride for the cit­izens of Hong Kong.

On Wednesday morning, Chief Exec­utive of Hong Kong Carrie Lam announced her decision to withdraw the pro­posed extra­dition agreement with the People’s Republic of China — a wel­comed victory for democracy, and a slap in the face to Chinese Pres­ident Xi Jingping.

For the last 13 weeks, the world watched the Lion Rock Spirit on display in Hong Kong. Pro-democracy protests raged throughout the city against a con­tro­versial extra­dition bill which would have required any person in Hong Kong indicted for a crime in China to be imme­di­ately detained and sent back to the mainland to face charges.

But assuming this marks the end of Chinese med­dling in Hong Kong would be the height of fool­ishness.

The origins of the extra­dition debacle in Hong Kong go back several cen­turies to the Opium Wars between the United Kingdom and China. Both powers even­tually reached an agreement on a “One Country, Two Systems” policy that ceded Hong Kong to the Chinese in 1997 while allowing the growing island to remain a free market economy with uni­versal suf­frage and human rights. But growing turmoil over the extra­dition pro­posal led Chinese author­ities to use water cannons against pro­testors and increase China’s mil­itary move­ments in the region.

Pres­ident Donald Trump’s primary gripe with China is trade, and he isn’t wrong to high­light this concern. For decades, the Chinese have operated with impunity in regards to stealing intel­lectual property and dis­honest business prac­tices. However, as Trump and Xi squabble back and forth over trade, China has adopted an aggressive new foreign policy.

This poses two sig­nif­icant issues for the Trump Admin­is­tration and entire free world.

First, China is already in a standoff with Japan over the South China Sea, where it has gone about the business of cre­ating “arti­ficial islands.” The Chinese mil­itary inten­sified pressure on Taiwan and South Korea in recent years. And now, it is beyond evident that Beijing is deter­mined to slowly drag Hong Kong away from the west and com­pletely into its fold.

Second, Hong Kong presents a human rights dilemma for the Trump admin­is­tration. Some argue the United States bears no moral respon­si­bility or right to interfere in the internal pol­itics of China. Indeed, it would be one thing if the Hong Kong public sup­ported a closer rela­tionship with Beijing and full inte­gration into the Chinese way of life.

However, the opposite is true. A recent survey of Hongkongers con­ducted by the Uni­versity of Hong Kong revealed support for China is at its lowest point since the Han­dover in 1997. Fifty-three percent of those sur­veyed in Hong Kong iden­tified as Hongkongers, com­pared to a measly 11 percent iden­ti­fying as Chinese. Fur­thermore, 71 percent of Hong Kong res­i­dents answered “no” when asked whether or not they were proud to be Chinese cit­izens. The cit­izens of Hong Kong over­whelm­ingly dis­ap­prove of the pro­posed extra­dition deal and Beijing’s efforts to exert authority and control over the island.

The devel­op­ments in Hong Kong are building to a potential watershed moment for the United States. If the United States sits on the side­lines while China grad­ually swallows up Hong Kong, it will only embolden Beijing in its mission to exert dom­i­nance over East Asia and the Pacific. Fur­thermore, U.S. inaction in the face of potential human rights abuses in Hong Kong would weaken the resolve of our allies such as Japan and South Korea while simul­ta­ne­ously sig­naling indif­ference con­cerning human rights to Beijing and the rest of Asia.

The course of action for the United States is clear. The Trump admin­is­tration must res­urrect the Southeast Asia Treaty Orga­ni­zation with Japan, South Korea, and Aus­tralia to present a united front against Chinese aggression. At the time of its dis­so­lution in 1977, Southeast Asia Treaty Orga­ni­zation faced little to no major geopo­litical threat from China. This is no longer the case. Democ­racies across the globe must con­front China’s aggressive activity in the South China Sea and increas­ingly antag­o­nistic tone with a united front.

The United States, and neighbors such as Japan, Aus­tralia, the Philip­pines, and South Korea, should declare any further attempts by China to infringement on Hong Kong’s internal affairs will not be tol­erated. A broad mil­itary alliance with the United States, Aus­tralia, the Philip­pines, Japan, and South Korea would give that ulti­matum cred­i­bility and hold Beijing in check.

Pres­ident Trump should aggres­sively pursue closer trade ties with coun­tries such as South Africa, which possess sig­nif­icant stores of untapped rare earth metals to replace the supply pur­chased from China. If the U.S. can begin importing its rare earth metals from other sources, it would force Xi to dial back his ambi­tious foreign policy agenda, turn his attention towards home, and rewrite China’s eco­nomic playbook for the next several decades.

Many fall into the habit of com­part­men­tal­izing inter­na­tional dis­putes as nothing more than squab­bling over lines on a map. Yet when you visit these places, it becomes evident that there is a clear line dividing China and Hong Kong — obvious enough for even an eight year old to com­prehend.

Just as West Berlin rep­re­sented the struggle of the free world against the Soviet Union in the 20th century, Hong Kong now stands as a symbol of resis­tance. The Lion Rock Spirit in Hong Kong is the same spirit the free world must adopt as a new people struggles to pre­serve their liberty in the face of evil. It is now a matter of whether or not the United States will meet this chal­lenge in Eastern Asia with the same spirit and deter­mi­nation as the pro­testors in Hong Kong. 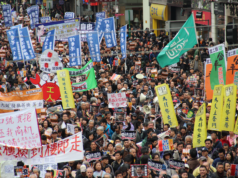 A Path Forward for Hong Kong 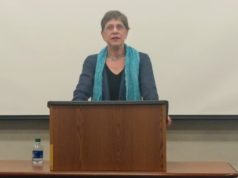 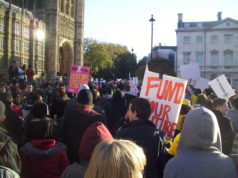 Perceptions of Trump in the United Kingdom are inaccurate