William Persson, the mar­keting coor­di­nator for Bon Appetit at Hillsdale College, said fig­uring out the menu is always more dif­ficult than you think.

“It’s called a chal­lenge for a reason, and the chal­lenge is pri­marily sourcing dif­ferent products to create the dish,” Persson said.

Since 1999, Bon Appetit has com­mitted to sourcing at least 20% of the ingre­dients they use from local farmers. The chal­lenge is an oppor­tunity to showcase that com­mitment. It requires chefs to make meals only with ingre­dients grown or pro­duced within 150 miles of Hillsdale College, with the exception of salt — a chal­lenge that the company has been doing  nationwide since 2005.

The team first figures out what ingre­dients are available for use and then crafts the meals from the available options, according to Persson. The Passport station will contain a smoothie bar, Persson said, while Com­forts will feature a sausage dish with spaetzle and local butter.

“I’m most excited to try dif­ferent foods that are locally grown,” Abigail Yi, a freshman, said. “I think that would be really cool to get a change in what I’m eating and to think more about what is going on my plate.”

Danielle Lee, mar­keting assistant for Bon Appetit, said the Eat Local Chal­lenge is an oppor­tunity for stu­dents to appre­ciate the work that farmers do.

“The chal­lenge helps people think deeper about where their food comes from and the hard labor put into growing produce,” Lee said. “Just sparking that small awareness in people, I think, helps them appre­ciate the food that they eat.”

In addition to trying locally sourced foods, stu­dents will have the oppor­tunity to meet and speak to local farmers Ezra and Mary Bertakis of Chef’s Way Organic Farms, who will be in the dining hall next Tuesday during the event to share more about what they do. 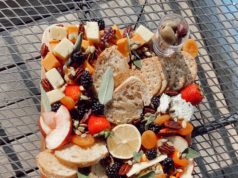 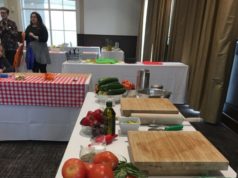