“Are you the one who started all this?”

She was the sole recipient of an inter­na­tional affairs degree last May. Being the only graduate called for the major she created herself, James said the ten steps across that stage were uncom­fortable and exciting.

“I didn’t want to do any­thing else,” James said. “My mother would tell me I’m a very stubborn person. Once my mind is set on some­thing, it takes quite a bit to deter me.”

Stu­dents may petition to create their own major, so long as they draw from at least three areas of con­cen­tration adding up to 36 credits and com­plete a senior thesis syn­the­sizing them all. Success in getting approval from each rel­evant department and the Edu­ca­tional Policies Com­mittee is the extra hurdle that dis­tin­guishes this major from the existing inter­dis­ci­plinary ones.

“Those are pro­grams of study that are long-estab­lished by the college,” Reg­istrar Douglas McArthur said. “A student doesn’t need to do any­thing special to declare an American studies major.”

The structure is con­gruent to the estab­lished American studies major, which James sus­pects started as a student-created inter­dis­ci­plinary major before becoming an official one.

Regardless, James said stu­dents pur­suing a major like hers must begin the appli­cation process early to utilize this unique Hillsdale oppor­tunity. They need to put together a good recipe.

“Making my major has been the absolute most wild ride of my life,” she said. “I found a purpose in what I was doing.”

James is cur­rently a foreign mil­itary sales analyst for the United States Air Force, a position she easily tran­si­tioned into after serving as a junior analyst during her summer Wash­ington Hillsdale Internship Program.

“The best way to describe what we do is this: ‘legal arms dealers for the US gov­ernment,’” she said.

A pre­req­uisite for the job was a major specif­i­cally in inter­na­tional rela­tions.

James said there are few pro­gres­sions from major to career that are so con­tinuous. She said she is grateful to Hillsdale College for taking chances on stu­dents they know will be a return on investment.

“I did a lot of research on other insti­tu­tions: Georgetown and Liberty Uni­versity, for example,” Umholtz said. “I looked at their pro­grams to see how they struc­tured theirs — how they fit with mine. You don’t want to have your major approved and enter the work­force lacking com­pared to your peers.”

The Edu­ca­tional Policies Com­mittee exists to ensure stu­dents avoid gaps in rel­evant skills for their field of study. Umholtz said they, in part­nership with McArthur, are nec­essary partners.

“If pro­fessors are working in higher edu­cation at Hillsdale College — in this envi­ronment — they are very knowl­edgeable and want to help,” Umholtz said.

Some of those pro­fessors are the ones from whom stu­dents need to get depart­mental approval anyway.

“Every one of these cases is a one-off,” McArthur said. “I don’t know what would happen if a student brought the same list of courses that they got from a peer who peti­tioned suc­cess­fully.”

He said the inter­dis­ci­plinary major, with mul­tiple stu­dents pur­suing a similar pathway in each of their peti­tions, is uncommon. In other words — since the Edu­ca­tional Policies Com­mittee approaches each petition case-by-case, a new question may emerge: Will they accept peti­tions in the same areas of study from dif­ferent stu­dents?

“I presume we’re on the cusp of seeing more of that,” he said.

Greco aims to take the chal­lenges of beginning this process seri­ously, taking inspi­ration from both James and her current mentors. She said Pro­fessor of English David Whalen and Asso­ciate Pro­fessor of Pol­itics Khalil Habib have not only men­tored her in coursework selec­tions, but also in man­i­festing her unique edu­ca­tional goals.

“I have a list of dif­ferent elec­tives that I could take, but — when I present to the board — I will need to have all those options planned out,” Greco said.

That is another feature of the inter­dis­ci­plinary major: The student must choose elec­tives early.

Greco believes a major fitted and tai­lored to her future is essential. Pre­scribing all coursework from the beginning is no issue.

“It didn’t feel rigid because I was making exactly what I wanted,” James said. “I felt like I had more freedom than anyone else.” 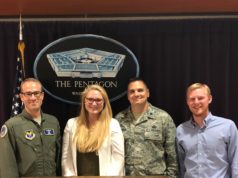