This year’s Hillsdale County Fair will have a concert for the first time in three years and also feature a new com­pe­tition: KOI Drag Racing.

“On Sunday, the first day of the fair, we are having KOI drag racing, which is some­thing new,” Hull said. “And that’s just general public, anybody inter­ested in bringing their vehicle in, any­thing from ATVs up to semis can drag race. That’s the com­pe­tition on Sunday.”

Hull said the only other change in the schedule will be a concert by the band, Hotel Cal­i­fornia A Salute to the Eagles, on Sat­urday.

“We’re very excited to have music on the fair­grounds again,” Hull said.

The fair­grounds also feature a new barn for draft horses and mules. Hull said the old barn was torn down and has been replaced with a new 175 feet by 60 feet building.

“It was a tough decision for the board because any his­toric building or older building sticks in the hearts of a lot of people,” Hull said. “But for us, the amount of money it would’ve taken to repair it, we still would have had an old building that had been repaired. With this we have a brand new building, it’s free­standing, there’s no poles in there to work around, so it makes it a much more usable building.”

Zinzer has ran the Donut Hut since 2010 and relies on vol­un­teers to keep up with all of the orders. Pro­ceeds earned from the Donut Hut’s sales go toward ren­o­va­tions for buildings on the fair­grounds.

In addition to the edu­cation building, Hull said one of the most popular attrac­tions is the live birth tent, where attendees have the oppor­tunity to see eggs hatch and sheep or cattle being born.

Hull said she first got involved with the fair through 4‑H and was a member of the board before becoming the manager. For Hull, fair week has always been a reunion for the com­munity.

“The world stops for a week in Sep­tember here in Hillsdale, and it’s an oppor­tunity where you’re guar­anteed to see people you very likely haven’t seen since last year’s fair,” Hull said. “That whole reunion-feel is special. It’s pretty important to the county, and I love being a part of it. I’m proud to be a part of it.” 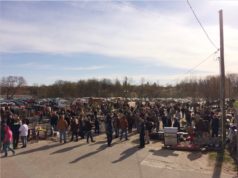 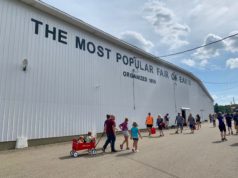 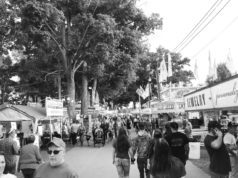