“Patmos, WI,” a radio drama written and pro­duced by Shadrach Strehle ‘19, has been nom­i­nated for Best Special Broadcast through the Col­le­giate Broad­casting Inc. It was also chosen as one of four finalists nationally. The piece was the only broadcast sub­mitted by Hillsdale to receive CBI finalist status this year.

Strehle was program director of WRFH for two years and cur­rently works as a reporter for the online pub­li­cation Great Lakes News. Strehle pro­duced his nom­i­nated piece as the final project for his advanced radio class. Thanks to its high pro­duction quality, the broadcast even­tually aired on WRFH and thus qual­ified for sub­mission to CBI. The pro­duction is a pilot for a super­natural thriller audio drama set in the fic­tional town of Patmos, WI. It was inspired by Strehle’s love of H.P. Love­craft and the tele­vision show Twin Peaks.

“It was a labor of love and I had a great time doing it,” Strehle said. “Audio pro­duction is some­thing that I am very pas­sionate about and getting to be awarded on a national stage is a dream come true.”

While the class only required the project be three to five minutes long, Strehle’s final product was over 10 minutes and uti­lizes an original script. According to Strehle, the entire pro­duction process took place over only three days.

“It was a very intensive pro­duction process with sound effects and voice actors,” Bertram said. “Taking the time to put all of that together to the high quality that it was is very impressive. I thought it had an excellent shot to be nom­i­nated as a finalist.”

Thus far, WRFH has not received a first place award from CBI, though last year it took home a fourth and third place recog­nition. The winner will be announced at the 2019 National Student Elec­tronic Media Con­vention in St. Louis at the end of October.

“We just submit the best stuff that we have to offer,” Bertram said. “I cer­tainly think that Shad pro­duced quality content that deserved finalist recog­nition, and hope­fully first place.”

John Miller, director of the Dow Jour­nalism program, said he believes that the nom­i­nation reflects well on the radio station.

“This is a great national recog­nition of Strehle’s abil­ities,” Miller said. “They have dozens of cat­e­gories with these awards, and it’s nice that our little station, which is still kind of new, got rec­og­nized in that area.”

Both Miller and Bertram empha­sized Strehle’s con­tri­bu­tions to the radio station as well as his talent for audio media.

“Shad did a lot of work to leave the station in a better place than he found it,” Bertram said. 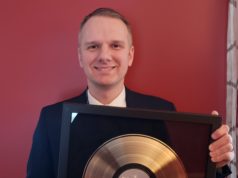