It’s a cold Friday night in October on the football field. The air is crisp. A group of young men are strug­gling and yelling, their breath coming in clouds. A coach’s whistle blows, and they col­lapse, exhausted.

This isn’t Friday night football. This is the Hillsdale College baseball team in the off season, and they’ve just fin­ished lunging the length of the field with a tele­phone pole for weight. This is Mental Toughness Friday.

Four years ago, Strength and Con­di­tioning Coach Patrick Gifford came to Hillsdale to help train Hillsdale College ath­letes, and met with Baseball Head Coach Eric Theisen and his father, Assistant Coach Gordon Theisen, before the team returned to campus for the fall. The Theisens, who were hired two years prior, had an idea for improving the baseball team’s mental approach to their game.

“We started talking about trying to win cham­pi­onships our first year,” Gordon Theisen said. “I firmly believe that you have to become a champion in your mind before you actually become one on paper, or in the field, or wherever you may be. I don’t think cham­pi­onships are won by accident.”

To do this, Theisen pro­posed what he called “Mental Toughness Fridays,” a par­tic­u­larly tough workout at the end of the week, with the purpose of strength­ening the players’ ability to push past failure. The dif­ference between losing and winning, Theisen explained, is almost entirely mental.

“In my expe­rience and edu­cation, I know that our brains don’t know the dif­ference between visu­al­izing some­thing and actually doing some­thing,” he said. “So when you visu­alize holding up a trophy, our brains reg­ister it as actually holding up a trophy. So we had to con­vince our players that they had to believe in them­selves as cham­pions before they were going to win them.”

But while Theisen described a kind of cal­is­thenics — such as sprint drills, planks, and situps — as his original plan for the Friday workouts, Gifford had other ideas.

“They had some ideas,” Gifford said, “And I said, ‘Yeah, those are fine, or we could do this…’ We decided to make them tougher than what was orig­i­nally planned. It was the goal of the baseball coaches, and I took it and ran with it.”

Workouts would ulti­mately include races to push trucks up a hill, car­rying tele­phone poles to notable mon­u­ments on campus, or car­rying tractor tires from the intra­mural baseball fields down to Hayden Park. Players are broken into teams of four or five, com­peting to win, and losers often have to do a penalty workout — what Gifford calls ‘the penalty for losing,’ and Theisen calls a ‘reward.’

“Part of that is moti­vation,” Theisen explained. “The losing team, for example, may have to do some­thing extra when they’re done. So you want to win, so you don’t have that. But what we really like to see is the winning team, when they realize that they won and they feel accom­plished, even though they’re dead-tired, we love to see the leaders on the winning team say, ‘Hey. We’re going to do this penalty — or ‘reward’ — with the team we just beat.’ And that’s the element of the team bonding that’s really important.”

Some of the workouts still “live in infamy,” according to Gifford, espe­cially that first one, in which each team carried a tractor tire — some still filled with rain­water and sloshing the guys in the face — out to Hayden Park, flipped it around a baseball diamond, and carried it back up the hill.

“With any­thing that we do in that strength-con­di­tioning aspect, it’s trying to improve them — not just phys­i­cally, because it’s a hard workout, but men­tally,” he said. “You have a chal­lenge that’s put in front of you and you’re going to have chal­lenges put in front of you all the time throughout life, and the question is what you’re going to do with those moments. So the hope with this, as for any­thing, is that they don’t back down when the chal­lenge is there.”

The goal is to get the guys to push back against road­blocks that might come up, whether at the pitching mound, in the dugout, or even later in their lives, according to the strength coach. Often, the chal­lenge appears to be greater than it actually is.

“There have been some that I’ve put in front of them and guys have been like, ‘We can’t phys­i­cally do that, that’s going to be impos­sible.’ And then they do it. They may fail a hundred times, but on the 101st time, they get through it,” Gifford said. “And that’s great.”

Four years later, Senior Kevin Monson said it felt “really good” to be among the first group to com­plete Mental Toughness Fridays, or “MTFs,” for all four off-seasons.

Monson described the time the baseball team carried a tele­phone pole around to notable spots around campus, and did workouts with the poles there, while other stu­dents looked at them “like we were crazy.”

“We still talk to guys that have grad­uated about certain MTFs that we’ve done in the past,” he said. “It does bring us together in the long run.”

Senior Christian Rodino explained that along with the MTFs each Friday during the off-season, the baseball team also has a week of MTFs at the end of October, before going into their short season. Some of the workouts during MTF week are more fun, such as 7‑on‑7 flag football and team relay races in the indoor pool.

“A lot of our guys aren’t very good at swimming, so it’s pretty funny to watch them try to doggy-paddle a whole lap,” Rodino said. “So we do get breaks during the Mental Toughness Friday week. MTF Fridays though, we don’t. That’s not a thing. They’re all tough.”

Gifford described how senior Joshua Hamrick — “a skinny, freshman pitcher who looked like he’d never worked out a day in his life” — handled his first Mental Toughness Friday.

“I think the other guys joked that after the first MTF he laid in bed the entire Sat­urday and didn’t move,” Gifford said. “But in the weight room, he’s a leader with the pitching staff now. Some of those guys are gym rats, weight room guys, and some of them are guys that’ve never had to workout a day in their life, and all of a sudden they’ve had to go through those workouts and MTFs for four years and it changes every­thing.”

Rodino didn’t have a favorite MTF, but he did have a least favorite: “All of them.”

“Giff does this thing called ‘STUD,’ ‘Squat Till U Drop,’” Rodino said, in which the players have to squat their body weight plus 10 pounds. “It’s pretty intense.”

Though later Gifford would only require players to squat 60 percent of their maximum, the first version of this workout wasn’t so easy.

“We had people squatting 80 times at their body weight, until their legs phys­i­cally couldn’t con­tinue,” Rodino said. “It was kind of cool, because it really showed you that even when you think you’re tired at 30 reps, you have the will and the mental ability to push on. That was one of the toughest ones.”

With the STUD, as well as other workouts, the concept is based on one the U.S. Navy SEALs use in their training, according the Gifford: the “40 percent rule.”

“When your brain is telling you you’re done, your body is only really about 40 percent done,” Gifford said. “You’ve still got a lot left in the tank, phys­i­cally. That’s the goal with them, is trying to get guys to under­stand that when they feel like they want to stop because it hurts, it burns, it’s whatever, they’re huffing and puffing, you still have more in the tank, you can do it, you can push through.”

Rodino said he’s found this to be mostly true, but for dif­ferent reasons.

“When you get to a point, you want to quit, but then you look to your side and you’ve got your team­mates still pushing on, so it really drives you not to quit. And then at the end of the MTF you always realize you could do a lot more than you ever thought,” he said. “As a senior this isn’t as evident, you kind of already have this pre­dis­po­sition from earlier years, but as a freshman it’s def­i­nitely a pretty inter­esting thing to see.”

Ulti­mately, Gifford said, this makes a dif­ference in the players’ game-day endurance.

“If they’re down late in the game, maybe it’s game two of a double-header, and they’re tired and they’ve played 17 innings of baseball already, it’s still not nearly as hard as some of the stuff they’ve had to go through on Fridays, and be suc­cessful. It builds con­fi­dence in them­selves, but also in their team­mates and the team as a whole,” he said.

What’s good for the team, however, is not always the most enjoyable. When asked about the players’ response to the workouts, Coach Gifford laughed.

“It’s a mixed bag. They embrace it, they know it’s a part of it. The baseball coaches know with the recruits that they bring in to visit campus in the fall, they bring them in on a Friday so they can see a Mental Toughness Friday. As Coach Theisen has said, if that scares them, we don’t want them,” he said.

“When it takes a whole team to carry a big railroad tie or tele­phone pole across the field and do curls with them or lifting them above their heads, those are always things that require timing and teamwork. The other things I really enjoy seeing are when players are pushed phys­i­cally to exhaustion,” Theisen said.

He added that the players refer to this per­se­verance under pressure as “grit.”

Grit­tiness aside, however, nothing is met with more hap­piness than the end of the Friday workouts.

“I had one guy in the past who grad­uated who told me that on Fridays he couldn’t eat all day, because he was so nervous and anxious about what I’d make him do. And then as soon as it was over on Fridays, his whole house would go up to El Cer­ritos and just smash dinner,” Gifford said.

This year’s senior class, as the first class to com­plete all four years, “cel­e­brated big time,” according to Gifford. 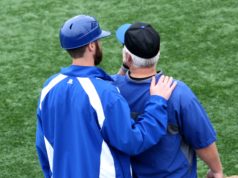