Several years ago, sophomore Konrad Ludwig was a skinny kid from Cal­i­fornia with a self-described “dis­ci­pline problem” who wasn’t sure if he was going to make it through high school.

Since then, he has served in the U.S. mil­itary, authored a book, and become a NASA-rec­og­nized com­puter pro­grammer.

Back in 2005, American troops were fighting in two wars in the Middle East and the army’s recruitment and retention was at an all-time low. The army needed men, and Ludwig wanted to do some­thing “big.” He enlisted at age 17.

In 2010, Ludwig was med­ically dis­charged as a sergeant with a trau­matic brain injury and post-trau­matic stress dis­order. He had traveled across the world, faced death, and was home before most people graduate from college.

“I’m not saying what we did was perfect. It was war,” Ludwig wrote in his auto­bi­o­graphical book, “Stryker: The Siege of Sadr City.” “But at least now I can point to a place in the world where some­thing I was a part of made a dif­ference for the better.”

Right after his dis­charge, Ludwig began writing his account of the war with a focus on his unit’s efforts in Sadr city. In the epi­logue, Ludwig con­fesses that he began the book partly as a way to com­mu­nicate to his family what hap­pened to him during the war.

He used the crowd­funding platform Kick­starter to finance editing and pub­lishing of the account, and raised over $37,000 in pre-orders of the book. The book is available on Amazon in paperback and kindle form.

The income from the book gave Ludwig the freedom to renew one of his interests from high school: com­puter pro­gramming. He even­tually acquired the skills of a full-stack web developer, which means he had the ability to code for both the user interface and the servers behind the scenes of a website.

“Pro­gramming is just a whole other side of my brain. Thinking through a problem in pure logic, mapping every­thing out, it’s just — it’s ther­a­peutic,” Ludwig said.

Ludwig and a team of his friends from high school who were also skilled in com­puters began preparing for the 2016 NASA Space Apps com­pe­tition. Space Apps is a worldwide, 48-hour hackathon where teams put together inno­v­ative pro­grams and tech­nology based on NASA’s data.

“NASA basi­cally says, ‘Here’s 48 hours, here’s all of our data, here are some prompts on things we think will be valuable. Make it work,” Ludwig said. “All you have to do is make a proof of concept or use their data to show that there is this thing you can do with the resources you have.”

During the hackathon, Ludwig and his friends proved you could create a program that would warn people about health risks resulting from atmos­pheric con­di­tions. They called the program Scin­tilla, and it com­bined atmos­pheric data from a satellite with a program that pro­vided real-time access to con­sumer sen­timent about air quality in dif­ferent areas.

Their project won the “Best Use of Data” award out of 1,287 sub­mitted projects. They also won the “Best Use of a Physical Com­ponent” award which earned the team a 4‑month paid research and design res­i­dency at the Sup­plyframe design lab in Pasadena, Cal­i­fornia to further develop the program.

At age 29, Ludwig decided he wanted to go to college to get a stronger back­ground in formal math to pursue his passion for machine-learning and data science.

“When I’m pro­gramming a web appli­cation, I have to think out every­thing and how it works,” Ludwig said. “But that’s not at all how machine learning and neural net­works work. There’s an art to putting together layers and you hope it works and con­verges.”

He chose to come to Hillsdale despite the fact that Hillsdale does not offer a major in com­puter science. He is now a sophomore and is double majoring in applied math­e­matics and eco­nomics.

“I have enough skills and expe­rience with pro­gramming that going to an actual com­puter science program would hurt me,” Ludwig said. “I’d spend 4 years learning about things that are 5 years old, and those are things I already know.”

Ludwig said his time in the army pre­pared him to take on heavy work­loads, and it’s some­thing he enjoys doing. This semester he is taking 21 aca­demic credits at Hillsdale for the sake of the chal­lenge.

“I was redlining myself because I wanted to see how far I can push it. I’ve never been in an aca­d­e­m­i­cally rig­orous envi­ronment when I’m really taking it seri­ously,” Ludwig said. “Now I know, and I won’t be doing that again.”

Ludwig is a member of the Shooting Sports team and is the pres­ident of the Vet­erans Honor Society of Hillsdale College. Ludwig said he is com­mitted to improving the rep­u­tation of the vet­erans on campus and inte­grating them more into student life.

In an effort to involve them­selves more in student life, the Vet­erans Honor Society created and worked the Warrior Dash, an obstacle course that stu­dents run in teams.

“Konrad really went all out for this,” said Joe Thistleton, a member of campus recre­ation who worked the event. “He worked way harder than he really had to.”

“Konrad is hard working, really well spoken, and a true warrior at heart,” said Lionel Arm­strong, one of Ludwig’s friends in the Vet­erans Honors Society. “That’s a really good com­bi­nation in a leader and I think that’s why he became pres­ident.” 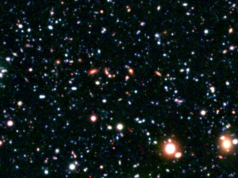 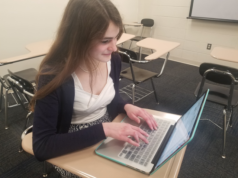 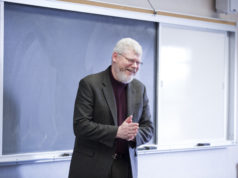 From programming computers to pursuing PhDs in the humanities