Moments before David Boswell learned he had won Art­works of Hillsdale’s Artist of the Year Prize, he stood before his stu­dents at Hillsdale High School, helping his chorale warm up for rehearsal.

For Boswell, his final year of teaching looks remarkable like the pre­vious 25 – investing in the musical com­munity of his stu­dents and peers, and finding ways to deepen the local musical com­munity through training chorales and sharing per­for­mances.

David Boswell, choir director at both Hillsdale High School and Davis Middle School, won Art­works of Hillsdale’s 2019 “Artist of the Year” prize, awarded to indi­viduals or couples who promote the arts in Hillsdale county.

Boswell’s own musical career started during his high­school years, when he was inspired by his high school choir director.

“I thought, maybe if I could be half as good as him, I could do some­thing good,” he said.

As Art­works of Hillsdale’s award has wit­nessed, Boswell has indeed done much good.

“He picked up a falling program and turned it into some­thing inspi­ra­tional, beginning with his arrival in Hillsdale in 1993,” she said.

Boswell’s stu­dents succeed both during and after grade school years. Each year his stu­dents from Hillsdale High School reach the regional and state levels, reg­u­larly qual­i­fying for the all-state choir.

Others have gone into teaching them­selves, including a now-alumnus of Hillsdale College who double majored in voice and cello per­for­mance before attending Uni­versity of Michigan for his masters in vocal per­for­mance.

“It’s a tough career, but he’s doing all the great stuff to make this career work. I’m awfully proud of him,” Boswell said.

Boswell has even inspired stu­dents to follow his own example, including a student who directs the choirs at Dewitt High School.

“She’s doing just an incredible job,” Boswell said. “Her choirs are among the best in the state.”

But Boswell doesn’t just train stu­dents to go on the road and bring back titles. Often the same trips to larger cam­puses with bigger pro­duc­tions spark ideas in Boswell’s head that he brought back and planted in Hillsdale.

The three-day art fes­tival, Artra­geous, which recently cel­e­brated its 13th year, was based on the Michigan Youth Arts Fes­tival, held on the campus of Western Michigan Uni­versity. On a trip to Western for a choral fes­tival, Boswell won­dered if Hillsdale High could replicate the fes­tival for Hillsdale’s own stu­dents and com­munity, and give greater pub­licity to the work he and his stu­dents already do. He pooled funds with the band and orchestra directors and helped start Artra­geous, a visual arts fes­tival held over a spring weekend.

While past years have included video projects and culinary arts, the program of Artra­geous centers around theater and music per­for­mance. This year’s show fea­tured “The Little Mermaid” on Friday and Sat­urday, with a coffee shop per­for­mance Sat­urday evening fea­turing the jazz band, stu­dents reading their own poetry, and various solos and ensembles. Artra­geous cul­mi­nated in Sunday’s Fes­tival of Song, a program that fea­tured Hillsdale High School’s band, orchestra, and both choirs. The visual arts of the stu­dents were dis­played so that the audience could browse before and after the theatre and musical per­for­mances, and during inter­mission too.

In addition to Artra­geous, Boswell also developed the Hillsdale Collage Concert, which was held this December for the 16th year in a row, at the Davis Middle School Audi­torium. Boswell ini­tially drew the idea at the state music con­ference at Uni­versity of Michigan, where he saw the larger school’s collage concert.

Now, Hillsdale’s own Collage concert is “probably the community’s favorite per­for­mance of the year,” Boswell said. “It might go from a flute solo to full choir to jazz band to string quartet. It’s very beau­tiful.”

Boswell’s love for music and the com­munity it pro­duces extends outside the classroom. His time in Hillsdale involved six years as the director of the Hillsdale Arts Chorale, which per­forms both sacred and secular pieces four times a year, ranging from Bach to Mozart to Bern­stein.  Boswell called Hillsdale Arts Chorale a “fan­tastic orga­ni­zation,” and said “I’m grateful for my time as a director.”

Boswell himself played trombone, tuba, and bass guitar in pre­vious years, but cur­rently enjoys guitar best, often on Friday nights per­forming around Hillsdale with his wife. Their band is called “Sec­ondary Roads,” and show­cases rock, pop, and blues. Some of Boswell’s favorite pieces include “Son of a Preacher Man,” Elle King’s “Ex’s and Oh’s,” and a healthy dose of the Red Hot Chili Peppers.

From Here’s to You Pub and Grub to the halls of Hillsdale High, Boswell leaves a rich legacy of investment in the Hillsdale’s musical com­munity, as rec­og­nized most recently by Art­works of Hillsdale’s “Artist of the Year” prize.

No matter the venue, classroom, or audi­torium, Boswell believes that music fosters people and their rela­tion­ships in a unique way.

“I think it helps us connect to our humanity – to connect with others. It doesn’t really matter the other people in group – what their beliefs are, or if they are dif­ferent.

For some­thing greater we can come together, and we’re better for that.”

Debbie Wyse, assistant choral director at Hillsdale College and a pre­vious recipient of the Art­works Artist of the Year prize, said in an email, “The next high school director will have  a tough act to follow.” 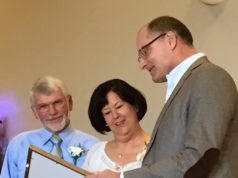 ArtWorks accepting nominations for 2019 Artist of the Year 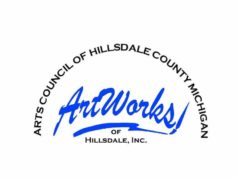 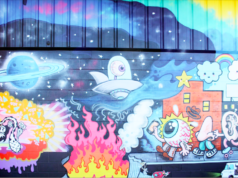