In their last match of the regular season, the Hillsdale College Chargers defeated Cedarville Uni­versity 7 – 0 as they honored their seniors in the Biermann Center.

All four seniors, Corinne Prost, Halle Hyman, Madeline Bissett, and Julia For­mentin earned singles wins en route to victory. Hyman did not drop a game, Bissett and For­mentin won easily in straight sets, and Prost came from losing the first set to force a tiebreak which she won 10 – 7.

The journey for these four has been a long one, filled with success and adversity over the past four years. Growth is a common theme among these players, who have expe­ri­enced many chal­lenges in their time in the tennis program.

“The journey through four years in the program has been extremely ben­e­ficial to me and my per­sonal growth. It made my college expe­rience some­thing that I’ll never forget,” For­mentin said. “Being a student-athlete was one of the most chal­lenging things I’ve ever done, but also one of the most rewarding.”

As someone who expe­ri­enced a few stressful matches this season in her 8 – 1 singles and 1 – 2 doubles record this season, Prost said she some­times felt pushed to her brink and learned how to press on.

“The ability to smile and give love in all its forms when you’re feeling neg­ative, the ability to push harder on a sprint when you have what feels like nothing left to give, and many more skills I’m still working on were a part of what being a Charger tennis player gave me,” Prost said. “I will forever be grateful for that.”

Still, when thinking about this weekend being the end of her col­le­giate career, Prost said she almost couldn’t com­prehend it.

“I get the same feeling you get when you go through your favorite childhood toys — that season of your life felt never-ending,” Prost said, “but then it was gone all too soon. It’s surreal.”

Looking back on the past four years, head coach Nikki Wal­bright said she’s seen the seniors flourish into the players they are right now through the many changes the program has gone through.

“We’ve had four very dif­ferent years here because we switched leagues and matches were kind of all over the place so they’ve all stayed really pos­itive,” Wal­bright said. “I think this year has been their shining year. Last year we didn’t have seniors so they were forced into that role, but this year they really shined with it.”

She said their efforts have strengthened and pushed the team toward success so far, which comes from con­sistent hard work and ded­i­cation.

“They don’t have any case of senioritis or any­thing. They’re the ones driving the rest of the team to work super hard and have stayed really con­sistent,” Wal­bright said. “They’re not checked out at all.”

On the eve of the G‑MAC Cham­pi­onship, where winning guar­antees a bid to the NCAA Regional Tour­nament, Wal­bright said the team is focused on staying com­mitted to their season-long mindset of going into matches with con­fi­dence but not expec­tation.

“You never know on any given day how matches will be, so our men­tality needs to go in thinking about it as a new match, having the con­fi­dence that we have a really good season behind us, but not nec­es­sarily being over­con­fident that it’s going to be easy, because I think they will be two very dif­ficult matches that we have to play,” Wal­bright said.

As the no. 1 seed, the Chargers will play no. 4 seed Findlay Uni­versity on Friday, and may go on to play the winner of no. 2 Walsh Uni­versity vs. no. 3 Tiffin Uni­versity.

Wal­bright said the team will be working on trying to stay focused on the point ahead this weekend.

“We’re working on con­sis­tency — we don’t want to let the small things define us this weekend, we want to be con­sistent with how we hit the ball, how we win our points, staying really con­fident on the court,” Wal­bright said. “We want to be really pos­itive about what we do and work really hard with it.”

This season, with the help of the seniors and con­sistent con­tri­bution from sophomore Hannah Cim­peanu and freshman Sarah Hackman on the one and two courts, the Chargers have put together a very strong season, fin­ishing at 14 – 2 overall, and an unde­feated 7 – 0 in the G‑MAC. These suc­cesses have put them in the national ranking at the highest ever at no. 46 last week and earned them the top seed in the G‑MAC.

“It’s been cool that our suc­cesses led us to the point that we’re in, but we’ve gotta keep staying focused on the task at hand — to win the next match, to hope­fully win the tour­nament, and to win the NCAAs,” Wal­bright said. “The pressure is there, but we’re excited for it.” 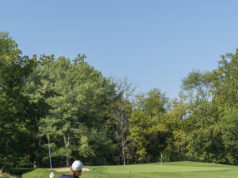 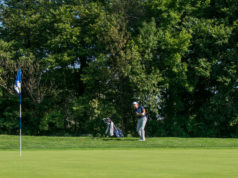