Statues, murals, arched ceilings, beau­tiful windows, and pat­terned floors sur­round the Detroit Institute of Arts in downtown Detroit. Thanks to SAB’s new “Day in Detroit” event, stu­dents now have a chance to spend an afternoon viewing and touring the art and special exhibits cur­rently on display.

Student Activ­ities Board is taking stu­dents on a trip to visit the Detroit Institute of Arts on April 6. Tickets cost only $5, which includes entry to the museum and trans­portation. The bus will leave at 8 a.m. and will return to campus at 5 p.m., with time alloted for stu­dents to get lunch in the museum.

Special exhibits include “Visions of American Life: Paintings from the Manoogian Col­lection;” “From Camelot to Kent State: Pop Art;” and “Ruben & Isabel Toledo: Labor of Love.”

“Every semester we try to do one travel event where you get outside of campus, because our job is to make sure stu­dents have fun on campus, but we also like to make sure we spice things up,” SAB pro­motion leader junior Ian Brown said.

Entry tickets for the museum are nor­mally $8 for college stu­dents with a valid student ID, but with  SAB’s pricing, Hillsdale stu­dents will have the whole day’s trip for $5.

“We intend for the event to bring stu­dents out of the Hillsdale area for a weekend, to get a breath of fresh air and a new expe­rience,” Assistant Director for Student Activ­ities Alex Whitford said. “Stu­dents can bring friends and the com­munity of Hillsdale to a new venue.”

“The Detroit Institute of Arts has one of the largest and most sig­nif­icant art col­lec­tions in the United States,” according to the DIA website. “With more than 65,000 art­works that date from the ear­liest civ­i­liza­tions to the present, the museum offers vis­itors an encounter with human cre­ativity from all over the world.”

The DIA was built in 1927 by architect Paul Philippe Cret who was born in France, and later moved to Philadelphia, Penn­syl­vania. Cret incor­po­rated French and Italian archi­tec­tural styles into his design, con­tributing to the wide range of culture offered by the DIA.

“The DIA’s col­lection is among the top six in the United States, com­prising a mul­ti­cul­tural and multi­na­tional survey of human cre­ativity from pre­history through the 21st century,” according to its website.

Brown says he thinks stu­dents will enjoy the oppor­tunity for a new expe­rience outside of Hillsdale.

“It’s a great excuse to take a day to appre­ciate culture,” Brown said. “And take a study break.” 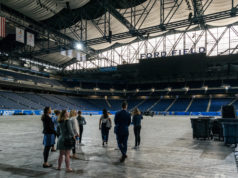