The City of Hillsdale will hold a special election May 7 to vote on a millage pro­posal which would provide funds for equipment and trucks that need repair for the city’s fire department.

Over the next 10 years, the fire department will need to pur­chase or repair equipment for the sake of effi­ciency and safety, according to Fire and Police Chief Scott Hephner. Some of the major issues are expiring air tanks, old fire engines, and the station’s com­mercial washing machine. Hephner has put together a chart of what items the station needs to pur­chase and when within the next 10 years. The total costs over that period will come to just under one and a half million.

According to Hephner, however, even the funds pro­posed for the initial pro­posal will fall short by about $250,000. With nowhere else to turn, he said the department is turning to a millage.

“We did not just say, ‘We need a bunch of money; let’s get the public to pay for it,’” he said. “We’ve taken all the other steps. We’ve cut our fleet down from five to four, and we’ve come up with a working business model.”

As far as the millage itself, Hephner and and Sharp both empha­sized that the ballot lan­guage will limit the col­lected funds to the equipment that needs to be replaced.

“The millage says exactly what it’s for. It’s not for ‘enhance­ments,’” Sharp said. “It is for this equipment only. It cannot go any­where else.”

When it comes to the millage’s effect on tax­payers, Hephner said $1 million for the city will come to about $127,000 a year.

When he took over as chief at the fire department, Hephner said he slowly dis­covered just how many things needed to be replaced and updated. One of the truck’s pumps, for instance, was not safe to use, he said. The year after he took over, the station’s 34-year-old ladder truck failed inspection due to some major issues, and those cost at least $1 million, according to Hephner.

In the last couple of years, according to City Manager David Mackie, had to replace two expensive firetrucks unex­pectedly. To cover that, he said in an email, money had to be taken from another city fund for one truck, while the city had to use money intended for road repairs on the other truck.

“Having been cre­ative on these last two fire truck pur­chases, the City Council asked the Public Safety Com­mittee to look at options to properly plan for these type of pur­chases in the future,” he said.

The com­mittee, Mackie said, decided it would be best to have Hillsdale res­i­dents vote on the best solution. Coun­cilman Bruce Sharp said the Public Safety Com­mittee has con­sidered every other means for funding.

“I don’t like asking for a millage, but I want to make sure we have an ade­quate and good fire department,” Sharp said. “Public safety is the no. 1 thing in Hillsdale, along with the roads. We want to take care of both.”

Sharp said every­thing Hephner wants to replace over the next 10 years are all needs, not wants.

“That’s why we’re coming to the tax­payers,” Sharp said. “We’ve got to find a way to fund the department.”

Looking for a sus­tainable way to keep funding the station is a primary concern for Hephner as chief.

“From a business stand­point, waiting until your major equipment goes into cat­a­strophic failure before replacing it is not a good business model,” he said. “A lot of equipment has expi­ration dates, and you aren’t legally allowed to use it after that.”

Such is the case with the air tanks for the fire­fighters. According to Hephner, all of the station’s air tanks were pur­chased on the same day, and thus will expire on the same day. The tanks must be tested four times a year, he said. Twice a year, they send in samples, and the other two times, a company comes in to test the equipment.

“The air in the tank has to be high quality breathing air,” Hephner said. “The company tells us we need to replace that equipment. It’s on bor­rowed time. We can’t let that go into cat­a­strophic failure.”

Beyond the tanks — which cost around $6,000, Hephner said — even the washing and drying machines are breaking down. When going into a burning building, Hephner and Sharp both said fire­fighters often get car­cinogens on their clothing, but nothing can be washed in a public laun­dromat or a private home; the station requires a com­mercial washing machine.

“Ours was built in 1984,” Hephner said. “There’s as much suds and water on the floor as in the machine.”

When it comes to drying, not having a com­mercial machine for that purpose is also hurting the station’s effi­ciency, he said. Cur­rently, fire­fighters are having to hang dry their equipment, which takes three to four days to dry, he said, whereas a pro­fes­sional-level rack and blower system could do it in three to four hours, while also avoiding mildew and bac­teria build up.

As far as the millage itself, Hephner and and Sharp both empha­sized that the ballot lan­guage will limit the col­lected funds to the equipment that needs to be replaced.

Mayor Adam Stockford, who is not serving on the Public Safety Com­mittee, said in an email that “if anyone in the city deserves a millage increase, it’s the fire department.”

“Their current sit­u­ation is unsus­tainable,” he said. “No matter what happens, the fire department needs our support and they have it. While I didn’t vote for this at the council table I’m com­mitted to finding the money however we have to.”

Sharp hopes voters will under­stand this millage is a last-resort option for the city’s safety.

“To keep the station up to speed, this is what we need to do,” he said. “We’re not doing this lightly.” 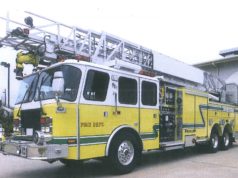