In their first outdoor matches at home, the Hillsdale College Chargers kept up their indoor-season pace with two shutouts against Saginaw Valley State Uni­versity and Ken­tucky Wes­leyan College over the weekend.

With these wins, the Chargers advance to 11 – 2 on the season and 4 – 0 in G‑MAC play. Their dom­inant per­for­mance earned them 50th in the IPA national rankings. While the con­ference match against Ken­tucky Wes­leyan included a 6 – 0 set in nearly every match, Saturday’s match against SVSU was much more of a contest.

Against SVSU, both Kam Matthews and freshman Sarah Hackman faced tiebreakers in their first sets. On the no. 3 court, Matthews won the first-set tiebreak 7 – 2 after being down in the set 1 – 4 and went on to win the second set 6 – 3.

On the no. 2 court, Hackman lost the first-set tiebreak 5 – 7 but got out in front of her opponent during the second set, winning 6 – 1 and forcing a third set tiebreaker which was more even. Hackman’s third turned out to be close, as she managed to avoid two match points and even­tually got the two-game margin in the 20th point to win the match 6 – 7 (5), 6 – 1, (9).

The Chargers faced pressure on the no. 4 court as well against SVSU. Senior Corinne Prost found herself down 1 – 4 in both sets, but each time was able to gain traction and come back and win the match 6 – 4, 7 – 5.

“My opponent had steady ground­strokes and didn’t miss unless I forced an error out of her,” Prost said. “Each time, I had to refocus and adjust to her adjust­ments so I could figure out how to chal­lenge her con­sis­tency.”

With a few comeback sets and tiebreaker wins, the Chargers dis­played a strong drive in coach Nikki Walbright’s view.

“I’m con­tin­u­ously impressed by my team and their ‘never giving up’ men­tal­ities,” Wal­bright said. “Every girl that played this weekend showed up to win.”

Against a team she knew would be a good chal­lenge, Wal­bright said the Chargers’ play reas­sured her of her team’s ability to rise to chal­lenges on the court.

“The per­for­mance was great, it showed me that it doesn’t matter who we play everyone is going to show up and do their job,” Wal­bright said. “It’s a great rep­u­tation to have as a team.” 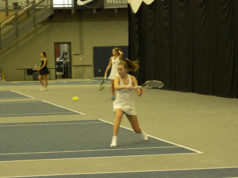 Top-seeded Chargers go back to back at G‑MAC Championship