In the fall of 1998, a small rural American town was changed forever as the com­munity faced the reality of a once-distant hatred hitting too close to their home of Laramie, Wyoming.

The people of Hillsdale County were intro­duced to the com­munity of rural Wyoming as the “The Laramie Project,” a three-act play, visited Jonesville’s Sauk Theatre for a four-day showing. It was part of the Sauk’s “Second Series,” where the theatre pro­duces con­tem­porary plays that deal with heavier issues, com­pared to its other pro­duc­tions that are more uni­ver­sally known and family ori­ented.

“The Laramie Project” is ori­ented as a self-aware docu­drama, a play about making the play. It is not just a loosely-based true story: the audience is told Shepard’s story  by actors playing the people of Laramie. Actors talk directly to the audience, and the words of the script are the real words of the real people.

James M. Brandon, chairman and pro­fessor of theatre and dance at Hillsdale College and one of the nine actors in the play, said this par­ticular element was exciting to him.

“I love when you take what real people have said and then reenact it on the stage,” Brandon said. “There is an honesty there that a play­wright making up lan­guage can’t capture.”

The play begins by describing Laramie, a small town where everybody knew everyone, and everyone knew everybody’s business. It was a simple com­munity that you’d only know about if you’d been there, but that all changed when the world found out about Matthew Shepard — a 21-year-old, gay, college student at the Uni­versity of Wyoming. He was found beaten and tied to a buck fence, fighting for his life. Shepard was gay in a time well before it was socially acceptable, and he was mur­dered because of it. The media put Laramie on the map after Shepard’s death, and soon everyone knew the name of the small town and the man who was mur­dered.

Brandon said the approach to this play is advan­ta­geous because rather than just giving one per­spective, “The Laramie Project” gives the audience the “whole mosaic.”

“It’s a chal­lenging play, it’s the kind of play people don’t want to sit and watch,” Brandon said. “It’s awkward and not as pretty as a fic­tional play, and that is exactly the point.”

The char­acters of the play rep­resent a range of real people in Shepard’s com­munity, from those who were shocked that some­thing like this would happen in their hometown, those who were not sur­prised at all, those who were also gay and feared for their own lives, and those who had no qualms with the murder of the young man because of his sex­u­ality.

The play was like news­casts used to be: the facts were pre­sented, each side was rep­re­sented, and the audience was left to make the decision for them­selves. The audience is invited to assume the role of the play­makers, inter­viewing the towns­people to find the truth of the story.

“So many things in this play will res­onate forever,” Michele Harmon, the stage manager said, “It is our respon­si­bility to tell it cor­rectly.”

The Sauk’s pro­duction of “The Laramie Project” was simply pro­found. Nine actors played some 67 char­acters, each nar­rating at one point or another. The actors never left the stage and were always visible to the audience, even when they weren’t in the scene. Most scenes only con­sisted of two char­acters at center stage, fixed around two wooden chairs to identify their inten­tional presence in that moment. Each actor was dressed in black with minimal props — just enough to dif­fer­en­tiate between char­acters. The wooden buck fence was fit­tingly the focal point of the stage, as it was central to the plot. This sim­plicity, from the stage direction to the props, allowed the story to speak for itself.

When the actors were not in the scene, they sat in chairs that framed the focal point of the stage as they pre­pared for their next role. While still visibly present, there was a clear indi­cation that they were not a part of the scene when they sat around the perimeter. It was dis­tracting at times to notice the actors who were not involved in the scene as they were preparing for the next char­acter they’d be playing, but it also added to the sim­plicity of the pro­duction.

Trinity Bird, the exec­utive pro­ducer of “The Laramie Project” at the Sauk Theatre said they con­sidered pro­ducing many plays, but this one was special.

“We didn’t do the play to try to preach a message,” Bird said. “But it’s all about love and hope. We aren’t that dif­ferent, we may have com­pletely dif­ferent beliefs, but we’re still the same. I hope that’s what people took away from it.” 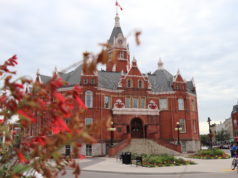 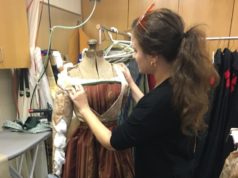 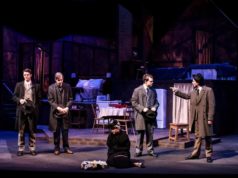