The Hillsdale College Chargers swatted nine home runs in five games over the course of a 3 – 2 road trip. The Chargers split a four-game series with the Lake Erie College Storm on Sat­urday and Sunday, and defeated the Saginaw Valley State Car­dinals on Tuesday thanks to four home runs in that game alone.

With four weeks remaining in the regular season, Hillsdale remains under .500 with a 12 – 19 record and in ninth place in the G‑MAC standings with a 7 – 9 con­ference record.

Junior shortstop Jake Hoover led off the game and the four-game series against Lake Erie by being hit by a pitch, and it would be a fore­shad­owing of things to come. Hoover scored in the inning on a sac­rifice fly by senior third baseman Colin Boerst, giving the Chargers a quick 1 – 0 lead.

Hoover wreaked havoc on the basepaths all game long, reaching safely in five of his six plate appear­ances with two hits, two walks, and the first-inning hit-by-pitch. Hoover also stole a base. He scored five of the Chargers’ 14 runs.

In the top of the fourth inning, Boerst extended Hillsdale’s lead with a two-run home run to right field, capping a three-run inning for the Chargers. Boerst fin­ished the game 2 for 4 with three runs batted in and three runs scored.

A leadoff home run to center field by junior right fielder Dante Toppi in the top of the fifth inning extended the Chargers’ lead to 6 – 1. The next inning, Hillsdale broke the game wide open.

Two singles and a walk loaded the bases with no one out to begin the top of the sixth inning, and sophomore des­ig­nated hitter James Krick promptly unloaded the bases with a grand slam to center field. The Chargers tacked on one more run in the inning to swell their lead to 11 – 1.

Krick swatted an RBI double in the seventh inning, and fin­ished the game 2 for 5 with five RBI. The Chargers scored in seven of nine innings, and enjoyed their largest margin of victory this season.

Senior pitcher Jonathan Lapshan col­lected his third win in the blowout, and went the dis­tance for a com­plete game, pitching nine innings of one-run ball. He needed to throw just 85 pitches thanks to a pitch-to-contact approach that netted him just one strikeout.

Junior pitcher Andrew Ver­brugge got the start on the mound for the Chargers in game two, and was touched for three runs in the bottom of the first inning and two runs in the second.

Ver­brugge hit two of the first three batters he faced out of the gate, and allowed a bases-clearing double in the first, giving the Storm an early 3 – 0 lead. In the second inning, Ver­brugge allowed three hits and two more runs, extending the deficit to 5 – 0.

Ver­brugge was pulled after just two innings, and fell to 0 – 4 on the year. Sophomore pitcher Austin Mora and freshman pitcher Caleb Biedenharn pitched two innings each to finish the game, and allowed just one run and three hits com­bined.

The Chargers plated their only run of the game in the sixth inning thanks to a fielder’s choice. The game ended after seven innings.

In the first game on Sunday, the Chargers’ bats were again dormant, and they col­lected just three hits in seven innings. Junior pitcher Chris Stewart was the tough-luck loser for Hillsdale, as all three runs he allowed in five innings on the mound were unearned.

The two runs in the sixth were crucial for Lake Erie, as the Chargers finally got on the board in the top of the seventh. Senior center fielder Christian Rodino swatted a one-out, solo home run to center field to cut the deficit to 3 – 1, but that was all the offense Hillsdale could muster.

If two games of a dou­ble­header could be exact oppo­sites from each other, game two was every­thing that game one was not. The two teams com­bined for just four runs and eight hits in the first game of the day, but in the series finale, they com­bined for 25 runs and 25 hits.

Lake Erie again got out to a lead, scoring two runs in the bottom of the first, and three in the third and fourth innings. Entering the top of the sixth, the Chargers faced an 8 – 3 deficit and were just four innings away from dropping three of four in the series after winning the first game.

But the Chargers, so reliant on the long ball throughout the week, played some small ball to get back into the game. Five singles and three walks plated six runs, and Hillsdale led 9 – 8. The Storm quickly tied the game at nine in the bottom of the sixth with a solo home run.

In the top of the eighth, however, Hillsdale’s bats struck again. Hoover’s two-run triple capped a five-run inning for the Chargers. Lake Erie scored two more runs in the bottom of the ninth inning, but sophomore pitcher David Toth slammed the door, recording the final two outs for his first save of the season.

All nine of Hillsdale’s hitters in the starting lineup recorded at least one hit in the win, and eight of the nine drove a run in. Sophomore left fielder Rob Zurawski hit a home run in the win.

The Chargers fin­ished the five-game road trip by again bringing out the bats against Saginaw Valley. Hillsdale jumped out to a 2 – 0 lead in the top of the first, and in the third inning, back-to-back home runs by senior des­ig­nated hitter Steven Ring and Boerst extended the Chargers’ lead to 4 – 1.

The next inning, Krick hit a two-run home run to right field, capping a three-run inning, to give Hillsdale a 7 – 2 lead. Krick fin­ished the game 3 for 5 with three RBI.

The Car­dinals tacked on single runs in the bottom of the fourth and sixth innings, and the Chargers led 7 – 4 entering the top of the ninth inning.

Ring led off the ninth with a solo home run to right field, his second long ball of the game. Ring fin­ished 3 for 5 with two runs batted in.

The Car­dinals scored twice in the bottom of the ninth, but Toth held on to finish the Chargers’ 8 – 6 win. Toth pitched the final five innings out of Hillsdale’s bullpen, allowing three runs while striking out six.

The Chargers return home this weekend for their first home­stand in nearly a month. The Ohio Valley Uni­versity Fighting Scots will visit Hillsdale for dou­ble­headers on Friday and Sat­urday. The Fighting Scots (6 – 24, 6 – 10 G‑MAC) are directly behind the Chargers in the con­ference standings. First pitch is at 1 and 3:30 p.m. both days.

On Tuesday, the Chargers travel to Grand Valley State Uni­versity for a game at 3 p.m. Hillsdale beat Grand Valley at home on April 3. 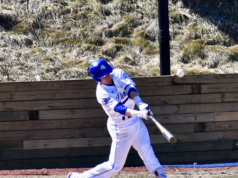