When she ini­tially heard about the oppor­tunity of cre­ating a senior display case, senior Kelly Sul­livan didn’t think there was enough time left in the semester to com­plete a display.

After speaking with public ser­vices librarian Linda Moore, Sul­livan decided to research and produce a display regarding lit­erary soci­eties on Hillsdale’s campus during the 19th century.

“Linda Moore ini­tially sug­gested the idea, and she was very helpful by pro­viding dif­ferent resources like the primary doc­u­ments,” Sul­livan said.

Each student in the inter­dis­ci­plinary Public History and Museum Studies class, taught by pro­fessor of history Dave Stewart, has the oppor­tunity to produce a senior display case as an inde­pendent study project.

“I’m a history major and a huge English nerd,” Sul­livan said. “And I thought it was the perfect com­bi­nation to focus on the history of lit­erary soci­eties and how they shaped 19th-century thought.”

“The influence that these soci­eties had on our early leaders showed how valuable these soci­eties could be,” Sul­livan said. “By the 19th century, the lit­erary soci­eties were sought after and very prominent because they had already proven their worth.”

The first lit­erary society in America, the Flat Hat Club, was founded at William and Mary College in 1750. Jef­ferson belonged to this society. While the society is no longer active on William and Mary’s campus, it was recently rechar­tered in Scotland at St. Andrews.

“They had this idea in their minds that they weren’t going to let the admin­is­tration define the con­ver­sa­tions they had,” Sul­livan said. “I think that’s where a lot of the inde­pendent spirit of the Hillsdale stu­dents comes from.”

In one meeting, Alpha Kappa Phi dis­cussed whether men were inher­ently better teachers than women and con­cluded that men were superior teachers.

“As someone who is going to be teaching in the fall,” Sul­livan said. “I thought it was an inter­esting question.”

Sul­livan said Alpha Kappa Phi had the largest presence on campus, fol­lowed by the Amphy­ictyon.

“The Civil War statue was not orig­i­nally intended to com­mem­orate all of the fallen sol­diers,” Sul­livan said. “It was put up by Alpha Kappa Phi society to honor fallen sol­diers from their society. I think people were annoyed ini­tially that it didn’t rep­resent all of campus, but the fact that it’s come to rep­resent all of campus shows how the soci­eties work.”

Alpha Kappa Phi also created the first campus news­paper, the “Alpha Kappa Phi,” released on June 16, 1858. Even­tually, the Amphy­ictyon and the Ladies Lit­erary Union also had their own pub­li­ca­tions.

“I think that helped con­tribute to The Col­legian and the Forum,” Sul­livan said. “It got that pub­li­cation ball rolling.”

Abo­li­tionists asked speakers like Dou­glass to speak for dif­ferent groups across the country, Birzer said.

“The lit­erary soci­eties were the groups these speakers were going to,” he said.

After Hillsdale College Pres­ident Edmund Burke Fair­field put out a mandate lim­iting the amount of people who could attend society func­tions, stu­dents started the Great Rebellion of 1866.

“This mandate was very upsetting to the college stu­dents, so they shut down the lit­erary soci­eties for about a year,” Sul­livan said. “This became a problem for the college because it realized that these soci­eties were very ben­e­ficial for stu­dents.”

Moore said the college did not have a central library prior to the Fire of 1874. For that reason, each of the lit­erary society had their own col­lection of books for stu­dents to use.

“Their members would give money or dona­tions of books, and stu­dents had to have per­mission from the soci­eties to go into their rooms and look at their books,” Moore said. “People ran from lit­erary society to lit­erary society looking for what they might find useful.”

After the Fire of 1874, the college com­bined the lit­erary soci­eties’ col­lec­tions into one central library in Central Hall, which became the basis for the college’s col­lection.

“It was a social orga­ni­zation, but it really pre­pared stu­dents for the kinds of occu­pa­tions many of them were going in to,” Moore said. “They did oratory and debate, and those skills are useful in law, pol­itics, religion, teaching, and min­istry. Even in their enter­tainment, the stu­dents were preparing them­selves for the world after Hillsdale.”

“Lit­erary soci­eties were perfect for the time they occupied,” Sul­livan said. “I think they could do a lot of good today, but I think they gave a lot to the current insti­tu­tions that we have, both Greek and hon­orary.”

During her research, Sul­livan said she worried the Greek system brought about the downfall of lit­erary soci­eties.

“I’m very proud of my sorority and it’s history,” Sul­livan said. “But I was con­cerned ini­tially because I asked, ‘Did we kill off the best thing about Hillsdale College?’”

Moore said lit­erary soci­eties on Hillsdale’s campus were on coming to an end by 1920.

“The college made an effort to keep them going by trying to combine the lit­erary soci­eties together, but times had changed,” Moore said. “And by the time the 20th century came around, the stu­dents had radio, and they had a lot of other things they could do, including the rise of the fra­ter­nities and the soror­ities.”

“A culture that strong doesn’t just fade away,” Sul­livan said. “I see it infused into every­thing we do.” 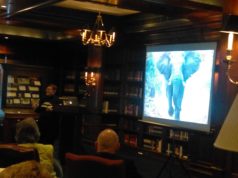 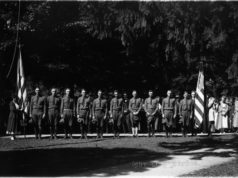