From Abraham Lincoln to Elvis Presley, the “Battle Hymn of the Republic” has been cham­pioned by a vast array of Amer­icans in the nearly 157 years since its com­po­sition. Fea­tured promi­nently at America’s defin­itive battles, funerals, rallies, and con­se­cra­tions, it has been used to prompt, justify, and glorify all manners of American thought and action. The Battle Hymn has made unde­niable the American inte­gration of nation and religion, and inspired scrutiny of the virtue thereof.

In his fourth book, “A Fiery Gospel,” set to be released May 15, Pro­fessor of History Richard Gamble tracks the emblematic song through time and across borders as it has become cemented in the American identity.  The book is the first in a three-part “Religion and American Public Life” series pub­lished by Cornell Uni­versity Press.

Julia Ward Howe wrote the “Battle Hymn of the Republic” in 1862 after observing a skirmish between Union and Con­fed­erate troops just outside Wash­ington, D.C. A rec­og­nizable Boston intel­lectual, abo­li­tionist, and author, she pre­sented her work to her editor, and it was pub­lished in The Atlantic and in the New York Tribune. Set to the melody of a well-known marching song, it enjoyed instant success, and was pop­u­larized as a stirring exal­tation of the Union cause.

“As mem­ories dulled, as the rough edges wore off the Civil War, and as Howe became a generic figure of Amer­i­canism suitable for postage stamps, the Battle Hymn became easier and easier to sing, moving freely across denom­i­na­tional, the­o­logical, and sec­tional bound­aries,” Gamble writes.

The Battle Hymn did not fade with the memory of the Civil War, but instead has been reit­erated vig­or­ously and inven­tively for political, reli­gious, and cul­tural pur­poses. Rife with bib­lical allu­sions, Howe’s poem evokes violent and apoc­a­lyptic lan­guage from the Old and New Tes­ta­ments, ref­er­encing the books of Genesis, Psalms, Isaiah, and Rev­e­lation. Gamble argues Amer­icans’ ready embrace of the song as a patriotic anthem demon­strates a propensity to reli­gious nation­alism, and the appli­cation of the song to sundry causes since betrays their igno­rance of its origin and impli­ca­tions.

In “A Fiery Gospel,” Gamble demon­strates Amer­icans’ heed­lessness of the Battle Hymn’s meaning by chron­i­cling its many and varied and uses since its cre­ation.

He writes that Amer­icans have used the battle song during every war they’ve fought in since the Civil War. Deployed by American impe­ri­alists, it jus­tified aggressive foreign policy by sanc­ti­fying the United States’ mission. The Battle Hymn rallied troops and civilians alike during WWI and WWII , steeling their resolve and assuring them of the right­eousness of their cause. During the Cold War, it was broad­casted to Russia on an American radio station.

Gamble also recounts the song’s various reli­gious appli­ca­tions. Since the 1860s, reli­gious leaders of all sects have pre­sented the Battle Hymn in sermons, often relying on its lyrics to to rec­oncile Christian and patriotic duties. Notable evan­gelist Billy Graham incor­po­rated it into his radio and tele­vision pro­grams and revival meetings.

He also describes the Battle Hymn’s role in American popular culture. Excerpts of the Battle Hymn have appeared in the works of Ezra Pound, e. e. cum­mings, and its themes are echoed throughout John Steinbeck’s novel “The Grapes of Wrath.” Per­formers as diverse as Judy Garland, Elvis Presley, and the Mormon Taber­nacle Choir have made popular their various ren­di­tions of the song.

The apparent ver­sa­tility of the Battle Hymn of the Republic extends to tragedy,  Gamble writes, as the song was played at the funerals of John F. Kennedy and Ronald Reagan, and at the national memorial service held a few days after 9/11. From Abraham Lincoln to Martin Luther King, Jr., leaders have used the song to promote freedom and civil rights for a century and a half.

In “A Fiery Gospel,” Gamble expounds the mul­ti­plicity of ren­di­tions of the “Battle Hymn of the Republic,” pre­senting a detailed analysis of its stake in American history and identity. He is critical of Amer­icans’ igno­rance of the Battle Hymn’s dis­tin­guished writer and its roots in reli­gious nation­alism, and of Amer­icans’ dis­regard for their nation’s history at large, but offers a fine remedy in his acces­sible, engaging, and above all infor­mative volume.

“I want people to under­stand Julia Ward Howe, and I want readers to think about the words they are singing,” Gamble said. 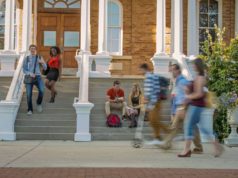