When senior theatre major Jessica Mac­Farlane had to choose a play to direct for her senior project, she wanted to find some­thing that would require intel­lectual dis­cus­sions with the actors. For her, the obvious choice was “A Doll’s House” by Henrik Ibsen.

The Tower Players’ pro­duction of “A Doll’s House,” which opened Wednesday night in the Quilhot Blackbox Theatre and runs through the weekend tackles dif­ficult ques­tions, including indi­vid­u­ality and mar­riage, according to Mac­Farlane.

“After I’ve lived and worked with the play for 16 months, it’s become so important and per­sonal to me,” Mac­Farlane said. “It’s so Hills­dalian in a way because it’s about self-gov­ernment and a person coming to terms with them­selves and the dif­ficult path that that is. Yet it’s not Hills­dalian, at the same time, because the end of the journey is not what people want it to be.”

The nar­rative focuses on Nora Helmer, played by sophomore Kirby Thigpen, as she wrestles with her role as wife and mother. Much of the action follows from how her husband, Torvald, played by freshman Jon Syren, per­ceives her as a person. The rising action begins when a secret from Nora’s past comes back to haunt her — she forged her father’s sig­nature to borrow money for the sake of her husband’s health. The man who lent her the money, Nils Krogstad played by senior Lane Gaudet, comes onto the scene and threatens to blow her cover. Nora is placed in a tension as she lives a sort of double life, attempting to be the perfect wife for Torvald, while knowing she used dis­honest means of securing money.

Thigpen said how the audience inter­prets Nora’s char­acter will affect how they view the play’s themes.

“There’s a theme of indi­vid­u­ality and being your own person and finding out how to do that,” she said. “But in my opinion, there’s also an under­lying theme of family and what it really means to be a part of a family.”

Mac­Farlane, who chose to set the play in 1950s Mid­western America, said the process of working with the actors has been spec­tacular. Mac­Farlane and Chairman and Pro­fessor of Theatre and Dance James Brandon sep­a­rately wrote down their ideal casts after audi­tions, and, serendip­i­tously, had chosen the same actors for their respective cast lists.

“I knew these were the people,” Mac­Farlane said. “Some of them were a gamble; I had never seen the married couple read together when I cast them. But we got to the read-through and it was apparent that their chem­istry was fan­tastic.”

The dynamic of directing a cast of her own peers was also a unique chal­lenge, she said.

Brandon said the play is an oppor­tunity to think through how we behave in society based on the roles society gives us, and what happens when those roles no longer make sense.

“Part of under­standing the play is getting a sense of how chained, how restricted, these char­acters are by the expec­ta­tions of their society,” he said. “The play pushes us to a con­frontation when a char­acter has to choose between what is best for her and what society thinks is best for her.”

The play is espe­cially rel­evant for college stu­dents, he said, who haven’t yet had their ideas tested by the world.

“They don’t have a lot of prac­tical expe­rience. What’s going to happen when your ideals meet the road of life?” he said. “Where and when is it acceptable to com­promise? That’s a dif­ficult thing to under­stand as an under­graduate.”

Nev­er­theless, Brandon said it has been great having an under­graduate direct the play, and MacFarlane’s dynamic has been ben­e­ficial. Mac­Farlane is one of only a handful of theatre stu­dents who have done a project in directing during his 21 years at Hillsdale.

“I take Ibsen for granted. I know how important he is; I know what he’s con­tributed to the theatre. But stu­dents always come at great classic works with fresh eyes,” Brandon said. “I’m jaded; Jessica comes to it with an energy and a unique per­spective.”

“A great actor is not always a great director,” he said. “Jess, I think, has the tools to be a great director. It’s been exciting from a faculty per­spective to watch those unlocked.” 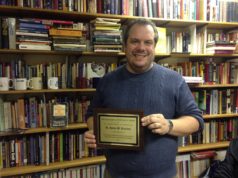 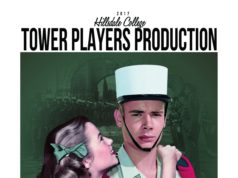 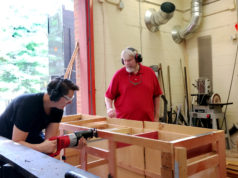 In with the new: New scenic designer brings experience to theater department