Punk music and Bruno Mars were blaring in equal mea­sures from Grange Hall at the Hillsdale County fair­grounds on Friday night. One student played guitar hard enough that her hand bled onto her instrument.

At CHP showdown last weekend, eight student bands battled it out to see who would get the coveted spot to open for the headline band at Cen­tral­hal­la­palooza, the Student Activ­ities Board’s last event of the year.

Flat Moon Theory, Gulf, Great White North, The Village Idiots, The 72, Penny and the Mandimes, Gin Henry and the Tonic Hammers, and Bad Liturgy — all student bands — rocked the old barn at the fair­grounds from 8 – 12 p.m., playing a mixture of pop, rap, classic rock, and punk. Stu­dents voted for their favorite set by putting a guitar pick in the vase of their favorite bands, which were counted at the end of the night and announced the fol­lowing evening on the Student Activ­ities Board Instagram.

Gin Henry and the Tonic Hammers, The Village Idiots, and Penny and the Mandimes were the top three bands stu­dents chose to play at CHP on April 27.

“You may not know all of these songs, but the thing about punk is it’s uni­versal,” Listro told the crowd. “Say your prayers, love your mom, and God bless America!”

Listro, Bad Liturgy’s lead singer, explained that the selection of music they played was both a tribute to the past and a nod to the present.

“Specif­i­cally, it was like Aus­tralia mixed with D.C. punk. D.C. def­i­nitely dom­i­nated 80s and 90s punk, and Aus­tralia right now really has a lot of punk going for it,” Listro said. “We like to think we encompass our parents’ punk and our punk.”

“My ears are absolutely deafened by the sublime noise of Gabe Listro’s voice,” Ryland said.

Though no floors were broken at last weekend’s musical staging, several of the same student bands per­formed at CHP Showdown as at Battle of the Bands a few months earlier, including Penny and the Mandimes, The 72, and Gin Henry and Tonic Hammers.

“We were one of the three bands who broke the floor at Elk’s Lodge,” Sophomore Nick Macaluso said proudly.

Macaluso’s band, The 72, per­formed an eclectic mix of music, from Huey Lewis and the News’ “The Power of Love,” to Mack­lemore and Ryan Lewis’ classic rap jam, “Downtown.” At one point, Macaluso sang a falsetto solo which was met with roars of approval from the crowd.

“I prac­ticed for about a week and a half leading up to this,” he said. “We knew we wanted to do the song, but we didn’t have someone to sing it, so I just gave it a try.”

Though The 72 did not place in the top three bands who will play at CHP, audience members were cer­tainly impressed.

“The last guy who was singing was amazing,” senior Maddie McAfee said after their set was over.

Juniors Claire Calvert and Zane Mabry, both members of Penny and the Mandimes, said they had con­fi­dence going into the com­pe­tition, though “it def­i­nitely wasn’t in the bag.”

“We knew we’d have to work at it, regardless. We always do,” Mabry said.

Penny and the Mandimes, who also per­formed at CHP last spring, tied with The Village Idiots for second place, with 68 votes. Gin Henry and the Tonic Hammers received 69 votes. Calvert explained that because of this, the order in which the three bands will play at CHP is still to be determined.

“We got third place, but that might not nec­es­sarily be where we are in the lineup for CHP,” Calvert explained. “Espe­cially since we did tie in terms of votes with one of the other bands, they’re still trying to decide what we’re going to do.”

Mabry and Calvert said they were very impressed with the other talent on the Grange Hall stage, and said the close numbers of votes were not surprising.

“I was there from nine to mid­night, and every band I saw I really enjoyed,” Mabry said. “I thought the overall level of com­pe­tition was really high this year, it was really impressive. Appar­ently a lot of people thought that way too, as the votes show.”

Though bands went all out for their per­for­mances, at the end of the night they encouraged stu­dents not to take the com­pe­tition of CHP showdown too seriously.

“We came out here to have a good time,” Strehle said, a sen­timent which Listro, Mabry, and Calvert also emphasized.

“We also want to entertain the people who are watching,” Calvert said. “And I think that works in our favor most of the time.”

Edi­tor’s Note: A pre­vious version of this story mis­stated that The Village Idiots won 69 votes, instead of Gin Henry and the Tonic Hammers. This story was updated to include the correct data. 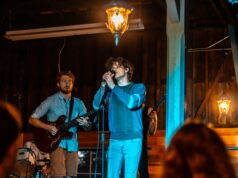 CHP Showdown is back 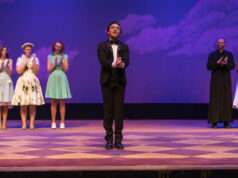