The Hillsdale College Chamber Choir per­formed the world pre­miere of “Three Sunsets” by Steven Lebetkin, a choral work based on Lewis Carroll’s poetry, at the Annual Spring Concert at College Baptist on April 13.

The concert fea­tured poignant numbers written in the 20th and 21st cen­turies. Fitting for Lenten Season, the reper­toire included “Agnus Dei” by com­poser Samuel Barber, “The Dark Night of the Soul” and the “Luminous Night of the Soul” by con­tem­porary com­poser Ola Gjeilo, as well as other songs of faith.

James Holleman, music director, said that much of con­tem­porary choir reper­toire is com­posed uniquely for college-age singers, whose voices blend well at their age.

“I’ve spoken often of the nature of music being written for choirs, so many of the top choral com­posers are living today and writing for these instru­ments,” he said ges­turing toward the students.

Lebetkin met Holleman during a music con­vention, and according to the both of them, became fast friends. Lebetkin wrote “Three Sunsets” for Hillsdale’s chamber choir, giving the piece of work to them as a gift.

He attended Saturday’s concert, and praised the stu­dents’ work on the piece. He said that Carroll’s poem is a poem of love and loss, and rep­re­sents the three stages of a man’s life of love and loss, punc­tuated by sunsets.

Per­forming Barber’s “Agnus Dei,” the voices of the chamber choir blended in tight yet gentle har­monies to convey the solemnity of the plea for mercy to “Christ as the Lamb of God.” They also sang “Brazilian Psalm,” an upbeat praise song with folk influ­ences, and sophomore Gabriel Kramer pro­vided a pow­erful tenor performance.

The folk theme con­tinued with “I’m Gonna Sing ‘Til The Spirit Moves In My Heart,” a spir­itual written by Moses Hogan.

Gjeilo’s “Dark Night of the Soul” and “Luminous Night of the Soul” has far more urgency, con­veyed by a quick ener­getic piano accom­pa­niment, pro­vided by Debbi Wyse. He wrote his music set to St. John of the Cross’s poem written during the Renaissance.

The full college choir sang the two songs, adding a depth of sound fitting to the cin­e­matic quality of the con­tem­porary pieces. Junior Christa LaVoie and sophomore Michaela Stiles soloed. Members of the choir junior Dominic Bulger and sophomore Zsanna Bodor accom­panied on cello and violin respec­tively, joined by senior Keely Rendle on the violin, and sophomore Anne Ziegler on the viola. 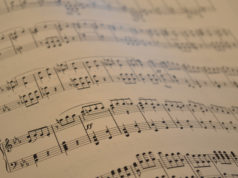 SAI to take ‘Adventure’ on Sunday