After grad­u­ating from Hillsdale College with a Bachelor of Arts degree in history, Arielle Mueller wasted no time beginning her pro­fes­sional career.

Mueller spent a year in Madrid, Spain imme­di­ately after com­pleting her under­graduate studies, where she received a master’s degree and taught history and art at a bilingual middle and high school.

Afterward, she returned to the United States, where she worked for Florida senator Marco Rubio for two and a half years. Her latest job on Capitol Hill has taken her to Romney’s office.

Mueller said halfway through her studies at Hillsdale, she got the idea that she might want to work in Wash­ington, D.C. The summer after her junior year of college, Mueller com­pleted an internship with Louisiana con­gressman Steve Scalise.

“After I had that internship, I fell in love with the Hill and the process there,” Mueller said. “I knew I even­tually wanted to come back and live in D.C. and work on the Hill.”

Mueller had also studied Spanish all her life, and at the time was pur­suing a Spanish minor at Hillsdale in addition to her history major. She said working in Wash­ington for the first time made her realize her love for the city and the prospect of working there, but she didn’t want to give up on her love for Spanish either.

“I had this dual dream of living abroad and living in Spain, so I applied to this master’s program in Madrid. I ended up getting accepted to that the spring of my senior year and put the D.C. dream on hold,” Mueller said. “I knew if I didn’t live abroad right after grad­u­ation, I might not get the chance again.”

Pro­fessor of Spanish Carmen Wyatt-Hayes had Mueller as a student at Hillsdale and said Mueller was “always bright and thoughtful” and “always com­mitted to doing the best thing for people.” Wyatt-Hayes also encouraged Mueller to look into going to Spain after grad­u­ating.

“What we try to do is prepare stu­dents for an expe­rience abroad,” Wyatt-Hayes said. “What you want to do is lay the foun­da­tions of grammar and vocab­ulary so that when they go to Spain, every­thing isn’t simply a cloud of not under­standing. But there’s no equiv­alent to being in the culture itself, because you see how a dif­ferent people does things.”

Mueller’s lifelong expe­rience with Spanish and year-long expe­rience in Madrid pre­pared her well for her next job. After Rubio ended his cam­paign for pres­ident in 2016, Mueller moved back to the United States.

Since many of Rubio’s con­stituents speak Spanish, Mueller fit the bill for what Rubio was looking for. She was hired on as a staff assistant and even­tually worked her way up to the position of press sec­retary for the senator. Mueller’s fluency in Spanish was essential to her everyday duties.

“I was mostly speaking to Spanish-speaking con­stituents,” Mueller said. “In a press capacity, I was helping out with any­thing press-related there. We ended up hiring a His­panic media director who took that whole port­folio. It was just filling in the gaps wherever it was needed.”

After working for Rubio for the next two and a half years, another high-profile oppor­tunity opened up. Romney claimed the open Senate seat in Utah by nearly 30 per­centage points in November 2018, and Mueller learned of the newly-elected senator’s search for a press sec­retary by word of mouth.

“He’s somebody I’ve always thought was a man of good char­acter and somebody that put out good ideas,” Mueller said. “But most of all, he’s a good person with strong morals.”

“It was really fun to see my old boss and new boss come together and unveil this big piece of leg­is­lation the GOP hasn’t tackled so far. It’s exciting to see we’re joining this con­ver­sation of paid family leave,” Mueller said. “It was a busy week; it was fun to get thrown into it. It’s a baptism by fire.”

Mueller said the nature of the 24/7 news cycle in Wash­ington means she must con­stantly stay on top of the latest hap­penings on Capitol Hill. Being a press sec­retary means wearing dif­ferent hats as well: It includes writing speeches, drafting state­ments, posting on social media, planning press con­fer­ences, and taking ques­tions from reporters.

Since being press sec­retary means Mueller is now Romney’s official spokesperson, Mueller said it’s important that people in her position believe in the ideas their bosses do.

“That was always really important for me. That’s why I’ve worked for Senator Rubio and now Senator Romney,” Mueller said. “I really believe in what they’re doing. That makes going to work easy, and you don’t have a lot of those con­flicts.”

Although the pressure of being spokesperson for a United States Senator appears daunting enough, Mueller didn’t seem to add any more to the fact that she’s worked for two former pres­i­dential can­di­dates as well.

“It is kind of funny to think of that, but I don’t really think about it that way,” Mueller said. “Right now, I’m just working hard and enjoying what I do.” 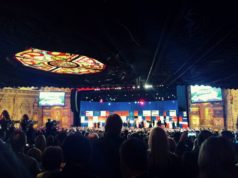 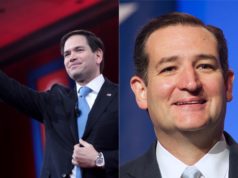 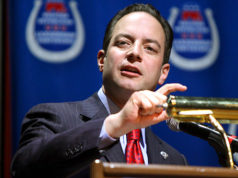 RNC Chairman: ‘Odds of a contested convention are small’