“Let us all be as vulgar as legally pos­sible,” declared junior Ian Brown at the beginning of the theatre department’s adaption of “The Mystery of Edwin Drood.” And the cast delivered.

Rupert Holmes’ murder-mystery musical “The Mystery of Edwin Drood” is based on the unfin­ished novel of the same name by Charles Dickens. The musical opened on Broadway in November 1985 and closed in December 1987, with 608 total per­for­mances.

The Hillsdale College Tower Players gave five per­for­mances of “The Mystery of Edwin Drood” in Markel Audi­torium Feb. 27 to March 3.

The play’s key feature is audience par­tic­i­pation: Holmes leaves audience members to vote between alter­native endings each night, instead of con­cluding where Dickens’ work leaves off.

Upon entering the audi­torium, the viewer could sense a unique ambiance: instead of hun­kering down back­stage rehearsing lines, the actors mingled in-char­acter and inter­acted with the audience as they found their seats.

The musical is a play within a play: the char­acters are actors in a 19th century Vic­torian theatre company which stages Dickens’ murder mystery. Actors switch between the two stories according to the com­mentary of char­acter William Cartwright, chairman of the theatre company, played by Brown.

The role of Drood himself was played by a female actress in the play — “England’s finest male imper­sonator” — sophomore and theatre major Abigail Bohrer. Drood is mur­dered but his body is missing, and each char­acter launches into his own inves­ti­gation to solve the mystery of Drood’s death. Each actor dis­played impressive range, switching mul­tiple times between the Dick­ensian char­acters and the entirely dif­ferent set of actors.

Junior Nicolas Uram gave a remarkable per­for­mance as Drood’s uncle John Jasper, a dark indi­vidual with psy­chotic ten­dencies and a suspect in Drood’s murder, while sophomore John Szc­zotka tackled the emo­tional swings of char­acter Neville Landless, an impetuous young man who com­petes with Drood for the affec­tions of Rosa Bud, played by sophomore Julia Salloum.

The second act of “Edwin Drood” con­tains numerous twists. Rev. Mr. Crisparkle, a slick min­ister played by freshman Jon Biscaro, manages to stay under the radar and non-suspect throughout the first act before emerging as a pivotal char­acter in the plot to kill Drood.

Audience members voted twice during the second act of the play, first to determine the role of Detective Dick Datchery after he enters the story, and to decide who mur­dered Drood, and again and the end to determine whether or not Drood is actually dead. At one point prior to the voting, the actress playing Drood storms off­stage, and does not return until after the final round, further com­pli­cating the question.

Despite the varying out­comes, one left the theater feeling content and assured they would still be sat­isfied had another char­acter been assigned the blame of murder.

“It was very well done,” sophomore Braden Van Dyke said after the Wednesday night showing. “It struck a good balance between comedy and sus­pense throughout the play.”

Chairman and Pro­fessor of Theatre and Dance James Brandon described the play as having a blue-collar, lower class Vic­torian theme with a “metathe­atrical envi­ronment.”

“You’re walking into a place where people are cog­nisant of who they are,” Brandon said.

In the end, what stood out most about “Edwin Drood” was the unflap­pable chem­istry of the cast. Whether it was Szc­zotka and Bohrer’s back-and-forth over the dinner table as Neville Landless and Edwin Drood, or the con­flict between Uram and Salloum as Jasper and Rosa Bud, the audience took in a kind of per­for­mance that is only pos­sible with a cast that fully embraces the unpre­dictability of the pro­duction. 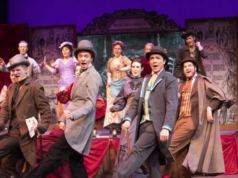 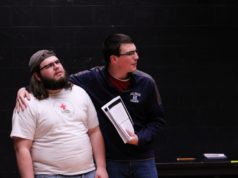