“I envy the audience being able to hear it all for the first time,” freshman vio­linist Vic­toria Nunez said of Shostakovich Sym­phony No. 5.

The audience will have that chance this Sat­urday and Sunday as the Hillsdale College Sym­phony Orchestra will be per­forming it in the Markel Audi­torium. Saturday’s per­for­mance will be at 8 p.m., and the Sunday per­for­mance begins at 3 p.m.

Russian com­poser and pianist Dmitri Shostakovich com­posed his Sym­phony No. 5 in 1937, and it was first per­formed on Nov. 21 of that year. The piece has four move­ments: Mod­erato, Alle­gretto, Largo, and Allegro Non Troppo, and it will be per­formed by 75 orchestra members.

“There’s a lot of his­torical research done on this piece. There’s a lot of back and forth on what he meant,” Holleman said. “It’s been inter­esting for us to study and undertake. It’s dif­ficult, but an amazing piece of music. It’s intense, melan­choly and lyric.”

Nunez said the orchestra members have been rehearsing for two hours a day, twice a week this semester, which doesn’t include the time the musi­cians practice on their own.

Nunez said she is most looking forward to the fourth movement.

“It starts with a mighty rumble, and I sit right in front of the drums. This means I get to expe­rience the sound­waves in such a physical way. My insides lit­erally shake when the drums are at their loudest,” she said.

Three of the top five fin­ishers at the 2019 Annual Student Con­certo Aria Com­pe­tition in the beginning of the semester will perform solos this weekend as well. The solo per­for­mances will occur before the sym­phony and will last about 30 minutes, and the sym­phony will be about 40 minutes, according to Holleman. The other two fin­ishers will perform during the second sym­phony orchestra in May.

“The initial critical response was neg­ative, with one critic saying the violin was ‘beaten black and blue,’” Brown said of Tchaikovsky’s piece. “Today, however, it is one of the best known and loved pieces in the violin reper­toire. I’ve wanted to play it for as long as I can remember, so this oppor­tunity to perform it with the orchestra is a dream come true.”

Nunez said she enjoys the piece because of its nar­rative beauty.

“When you par­tic­ipate in the orchestra, you get to listen to the many strains of music move around you as dif­ferent sec­tions hand off dif­ferent parts of the melody or harmony to each other,” Nunez said. “Lis­tening to a sym­phony from start to finish is like exam­ining a rich tapestry: every color has a shape, a des­ti­nation, and a part to play.”

After Saturday’s per­for­mance, the Hillsdale College Jazz Combo, Primary Colors, will be per­forming in the McNamara Rehearsal Hall in the Howard Music Building.

“There will be a dance floor and refresh­ments,” Holleman said. “People can talk to the orchestra members, listen to jazz, and dance. It’s just a fun event we do after the Sat­urday concert.” 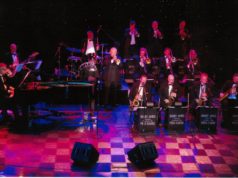 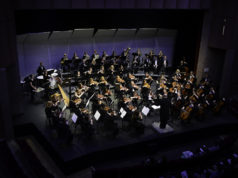