She is not only a sister to the many girls in the Chi-Omega sorority. She is an older sister to eight younger sib­lings, including her newly born sister, Rosemary. She is Josephine Von Dohlen.

This year’s Col­legian City News editor hails from Min­neapolis, Min­nesota. Josephine is majoring in American studies, with a minor in jour­nalism.

Josephine became involved in the Col­legian during the second semester of her freshman year.

“I did a lot of theater pro­duc­tions and public speaking events in high school, and lots of people told me I’d grow up to be a news anchor. I think I got a little more intro­verted in college, and so I thought I might like writing for the news­paper rather than speaking on TV. I knew I had to go to the Col­legian office and just pick up a story, but I didn’t know where it was my first semester, and I didn’t want to go alone,” Von Dohlen said.

Thank­fully, Josephine worked up the courage to find the Col­legian office and get involved. After writing her first story about the Hillsdale Hos­pital, she has been a steady con­tributor to the paper, writing a story nearly every week. The Collegian’s com­munity is a major reason for her joining the staff.

“I chose the com­munity because each of the editors that I worked with were so kind and patient to teach me how to write for news, and I admired them so much,” she said.

The com­munity of Hillsdale as a whole is also her favorite part of the college. She says she is blessed by the influ­ences her friends, Chi-Omega sorority sisters, pro­fessors, and fellow jour­nalists have con­tributed to making her the woman she is today.

Outside of the Col­legian office, Josephine enjoys pho­tog­raphy, espe­cially taking pic­tures of other people.

“I really love taking pic­tures of people. It’s just a lot of fun. I think one of the best com­pli­ments I’ve received is when  someone told me that I helped her feel beau­tiful. I was like, yes! That’s why I’m doing this,” Von Dohlen said.

Trav­eling is another one of Josephine’s favorite hobbies. Her favorite trip she has taken so far was in January  2018, when she went to Israel for a jour­nalism trip.

“We got a great fast course in edu­cation about the history of Israel, as well as the reli­gious sig­nif­i­cance. I had the best time,” Von Dohlen said. “I got to write a feature story about a group of con­se­crated women in Magdala, Israel, who remind women around the world of their dignity by bringing hope through healing. Going to Israel is probably one of my favorite high­lights of my life so far.”

Josephine also enjoyed  a The­ology of the Body class with Nathan Schlueter, pro­fessor of the­ology and religion. She called it the “best class ever.”

“I didn’t take this class for my major, or for my minor, I took it just because I thought the infor­mation would be good for life. We really learned the details of John Paul II’s teachings on humanity and it was really eye opening,” Von Dohlen said.

After com­pleting her American Studies major and her career as a Col­legian jour­nalist, Josephine is still unde­cided about what she’ll do, but has an open heart as to where she may go.

“I can see myself being a city reporter for awhile, but also going into com­mu­ni­ca­tions for a non­profit would be really fun,” she said. “I can see myself doing a lot of things, so I’ll just see what doors God opens.” . 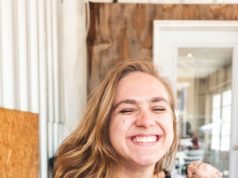