Fewer rising juniors were given per­mission to live off campus in the 2019 – 20 aca­demic year, due to a smaller freshman female class and the planned re-opening of Gal­loway men’s res­i­dence.

When deciding which stu­dents receive off campus per­mission, the deans con­sider a student’s high school grad­u­ation date — in order to account for stu­dents who have taken a gap year — then credits earned at Hillsdale, and the number of dorm beds they have to fill. Filling the beds depends on the incoming class size and which upper­classmen choose to live on campus.

The deans operate on a stag­gered release system, giving a certain number of stu­dents off-campus per­mission in the first round. Once those stu­dents either accept or deny per­mission by a certain deadline, the deans release another round of per­mis­sions.

This spring, the deans gave 45 men (32 rising seniors and 13 rising juniors), per­mission to live off campus next year, with eight stu­dents declining. Last year, 171 men were given per­mission, with 151 accepting.

Dean of Men Aaron Petersen said an unusually high number of rising sopho­mores were given off-campus per­mission last year, since Gal­loway men’s res­i­dence is under con­struction this school year and also because this year’s freshman male class was unusually large. Since many of these stu­dents were rising sopho­mores and do not need to re-apply for per­mission, the numbers appear smaller if looking only at the number of rising juniors given per­mission to live off campus this year.

“In next year’s junior class, there’s a fair amount off that just got off a year early, depending on how you frame it,” he said.

Seventy-six women — 72 seniors and 4 juniors — were given per­mission to live off campus next year, com­pared to 125 last year. The number of women who actually ended up off-campus last year was 178; 21 sopho­mores, 48 juniors, and 102 seniors, since some were granted per­mission in late spring or summer.

Fewer women were given per­mission to live off campus for next year because the current freshman female class is smaller — around 160 — whereas it’s nor­mally around 180 to 190.

“Twenty to 30 more would have pushed that next group off, but that’s not hap­pening,” Dean of Women Diane Philipp said. “That’s just a weird anomaly that we had that big guy class and small girl class.”

Philipp said she based the number of off-campus per­mis­sions last year on what she thought would be a female class of the same size, which accounts for the dis­crepancy between this year and last.

Philipp went on to say that she had empty beds this year because of this dis­crepancy.

The new women’s dorm also played a factor last year, since it opened up Whitley Res­i­dence for the men.

“We built the new dorm because we had too many sophomore guys off campus, and there was a dis­crepancy between men and women getting off because we had more housing for women. It made more sense,” Philipp said. “The dif­ference was around 50 beds. The guys last year had to be let off, which was around 50.”

Philipp said the deans like having freshmen and sopho­mores on campus because stu­dents will be more likely to be involved in campus activity.

“We love stu­dents to stay on campus and stay involved on campus,” Philipp said. “The only thing that we notice is once you go back to your off campus apartment you tend to not come back in the evenings.”

“We like to keep stu­dents immersed in the campus com­munity as much as we can during their four years,” he said in an email. “ A strong campus com­munity is an important part of ful­filling the College’s mission. The under­classmen benefit from the men­toring of upper­classmen not only in the classroom and dining halls, but in the res­i­dence halls.”

The only reason a student would receive off campus per­mission as a sophomore is if there were not enough beds on campus to house both the incoming freshmen class and upper­classmen who wish to remain on campus. Freshmen always remain on campus unless they commute.

Sophomore Grace Stokman received off campus per­mission last year but said she is having trouble finding a group of girls to live with in the off campus house, Graceland. Stokman said the stag­gered process of giving stu­dents per­mission to live off campus is dif­ficult, espe­cially this year.

“It’s really dif­ficult to form a cohesive group in your house because your list of friends are given per­mission at stag­gered times,” she said. “Land­lords often demand leases to be signed at certain times. If your friends don’t get off campus, then you have to find random people to room with which isn’t ideal.”

Sophomore Gabe Kramer, who was seventh on the list to receive per­mission, did not receive off campus per­mission until the second round; however, he will deny the accep­tance since he and another sophomore, Henry Eising, had agreed to room together, whether that be on campus or off campus, and Eising was not given per­mission.

After being ini­tially denied per­mission, Kramer said he was looking forward to living off campus.

“I was very excited to live with my friends,” he said. “I knew it wasn’t guar­anteed but I thought, OK, last year everyone who applied to get off campus, got off campus, I have a good GPA, lots of credit hours. I was leading the pack.”

Kramer will instead live in Gal­loway with Eising next year.

According to Miranda Parker from Hillsdale Rental Man­agement, local land­lords are “finding it more chal­lenging this year” to offer housing for stu­dents, and the “the sig­nif­icant reduction in stu­dents that have received off campus per­mission for next school year has cer­tainly created an obstacle for land­lords.”

Philipp said the numbers next year will return to normal. The pre­dicted freshman class size for next year is 370, which was the target number for the admis­sions office, according to Asso­ciate Senior Director of Admis­sions Fred Schebor.

According to Philipp, it looks like the incoming freshmen class it will be almost evenly split between men and women.

“The changes should even out next year,” she said.

Petersen went on to say that as the aca­demic semester rolls to an end, it is not unlikely that a few more stu­dents will be allowed off, since there may be small changes in the actual class size of the incoming freshmen and other factors. 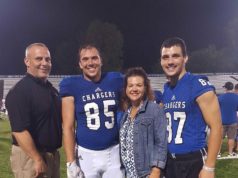