Earlier this month, after a faculty vote, stu­dents were reminded they will need to com­plete a senior cap­stone course by the end of their senior year in order to earn a degree from Hillsdale College. The school decided to imme­di­ately implement the new cur­riculum in the fall 2019 without allowing stu­dents any sort of grace period or trial.

Many stu­dents entered into their college course planning with high expec­ta­tions of double majoring, earning a minor(s), or even having the oppor­tunity to study remotely, but due to the hefty liberal arts core cur­riculum, many stu­dents feel they have had to sac­rifice their aca­demic goals.

Transfer student Vic­toria Mar­shall said, “I trans­ferred in as a junior, and even though I came in with 60 credits, I will not be able to graduate in two years. Because the core cur­riculum is so big I have to be at Hillsdale for at least three. I was planning on going on WHIP, but at this point it will be super hard to manage.”

Another transfer student, Car­oline Hen­nekes, says that although an Art-English double major would have been pos­sible a year ago, with the increasing require­ments, she does not find it pos­sible to accom­plish this, even with summer classes and study abroad.

Other stu­dents respond to the core cur­riculum with dis­ap­pointment of not being able to minor in jour­nalism or art due to the heavy core require­ments, although they already have credits for courses in those areas and are highly involved in extracur­ricular activ­ities asso­ciated with the studies.

With these already heavy require­ments, the faculty has decided it will now implement yet another one-credit course, which could make it even harder for stu­dents to accom­plish some of their goals at Hillsdale. Fur­thermore, the senior cap­stone has yet to be tested with any grad­u­ating class.

Though the course was listed in stu­dents’ course cat­alogs starting in the 2016 – 17 school year, the course is being imple­mented with little prior dis­closure to stu­dents of what it would entail. Without any pre­vious expe­rience offering this style of lecture or class, the admin­is­tration, by imple­menting it within the next year, is putting grad­u­ating stu­dents’ GPAs and aca­demic records at risk.

Imple­menting a core requirement without testing its cur­riculum is a mistake. The newer core classes are proof of this: As a first-semester freshman, I took Logic and Rhetoric while the textbook we used for the semester was still being written — we even received extra credit for finding any errors in the textbook while reading.

It is hasty and unpro­fes­sional for the admin­is­tration to implement new teaching material without first pro­viding a grace period or trial-and-error process. If the admin­is­tration wishes to implement the new cur­riculum so quickly, the class should ini­tially be graded on an atten­dance and par­tic­i­pation basis. Stu­dents should com­plete the course on a pass/no-pass grading system.

Con­sid­ering the exis­tence of com­pre­hensive exams for every major, the written exams should be obsolete for at least for a year or two, or however long it may take the depart­ments to find mastery. Pro­fessors should be given time to ensure that new courses, like the senior cap­stone, are up to par with classroom and teaching stan­dards, and that stu­dents’ GPAs are not neg­a­tively influ­enced due to a lack of expe­rience. After this trial period, the admin­is­tration could then deem the one-credit course worthy of a letter grade.

But let’s say, the­o­ret­i­cally, this one-credit class pushes a student over the edge of his full-time student status and causes him to pay extra for a course he didn’t plan on taking. Messing with stu­dents’ financial planning and schol­ar­ships is not some­thing that should be taken lightly, simply because an addi­tional class is “only” one-credit.

In the jour­nalism program, stu­dents are encouraged to take part in the once-per-semester Pulliam Fellow one-credit course, where a guest jour­nalist teaches a week-and-half-long class on a modern aspect of jour­nalism. More than once I have wit­nessed stu­dents trying to enroll in the one-credit course only to find them­selves pushing over the course limit for their full-time student status, and being faced with an addi­tional $800 class if they choose to enroll. If this occurs with extracur­ricular courses stu­dents are not required to take, then it must be even more likely for it to occur with a required seminar.

Many would argue that a one-credit course only requires an hour or two of time per week, but more likely than not, one-credit classes require a longer time com­mitment. Stu­dents will be required to attend five class-wide lec­tures from Pres­ident Larry Arnn and five depart­mental lec­tures in a student’s own major, according to the pro­posal crafted by the provost’s office and the aca­demic deans. The course will be con­cluded with two 1.5‑hour essay tests. Looking at its pro­posed schedule, the Senior Cap­stone will require more than an hour or two of stu­dents’ time per week, in addition to their regular aca­demic schedule. Not only do stu­dents not have the time to commit and make this class work, but pro­fessors, on top of their usual course loads and com­pre­hensive exams, will have to add this to their list of to-do’s toward the end of a school year.

Pro­fessor of Eco­nomics Gary Wolfram says that during the spring he already typ­i­cally has around 80 to 90 stu­dents, which means that at the end of the semester he grades this same number of final exams.

This step to make an addi­tional senior cap­stone course a sud­denly noted requirement for both next year’s and pro­ceeding seniors, after several years of uncer­tainty of what it would look like, is unmindful and even neg­ligent. Upper­classmen and pro­fessors are rightly hes­itant — so why is the admin­is­tration pushing this course so soon? Reliable and rep­re­sen­tative edu­cation requires a concern for the aca­demic well­being of each student and pro­fessor, espe­cially when intro­ducing a course stu­dents’ degrees will depend on. 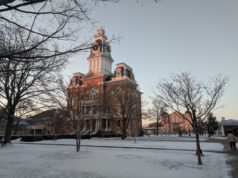 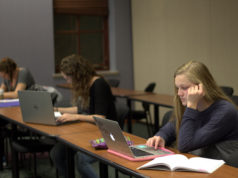 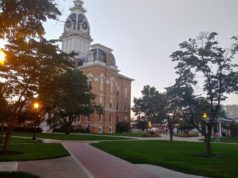