French his­torian and philosopher Remi Brague will be on campus Monday, April 1 to speak on the study of clas­sical lan­guages. The lecture begins at 8 p.m. at Dow Con­ference Center rooms A & B.

Brague is pro­fessor emeritus at Sor­bonne, oth­erwise known as the Uni­versity of Paris, and the Ludwig Max­i­m­ilian Uni­versity in Munich, Germany. The title of Brague’s upcoming lecture is “Our Own Others,” and it will focus on why studying clas­sical lan­guages and cul­tures is important.

Lindley has read many of Brague’s books, and said Brague reached out to him after learning that Lindley had authored his Wikipedia page.

“I’ve essen­tially been a fan of his for a while,” Lindley said. “I’ve heard him speak a few times, and we’ve known each other and exchanged emails on and off. This year, it’s finally worked out to bring him here.”

Lindley has taught Col­le­giate Scholars sem­inars on Brague, and said Brague has expressed interest in coming to Hillsdale to speak.

“It’s a great priv­ilege to bring him here,” Lindley said. “He’s inter­ested in Hillsdale: he knew about it already before I got in touch with him and has been wanting to visit.”

Brague’s writings and studies have cen­tered around the Western tra­dition and how it has pro­gressed from the ancient world to modernity, according to Lindley.

Senior Sammy Roberts, one of the stu­dents who took Lindley’s seminar, said Brague’s focus is not only on what important to the West, but why it is important.

“At Hillsdale, we make a big deal about reading the Great Books and learning about the Western Her­itage, but we some­times don’t reflect on why these books are great or why this her­itage is worth talking about,” Roberts said. “I think Brague’s scholarly endeavor — one that seeks to explain why civ­i­liza­tions return con­tin­ually to their intel­lectual past and set out in search of extra-cul­tural inter­locutors — will help us to artic­ulate our jus­ti­fi­ca­tions a little bit better.”

Roberts said he appre­ciates Brague’s ability to involve a variety of dis­ci­plines in approaching scholarly ques­tions.

“You’ll see him cite phi­losophy, his­torical chron­icles, modern philology, and popular novels in one swift stroke,” Roberts said. “His ability to inte­grate all these dif­ferent forms of knowledge together grants him insights denied to less open-minded aca­d­emics.”

While Brague’s influence and noto­riety are well-estab­lished in Europe, Lindley said his pop­u­larity in America has been increasing. Brague’s book, “Eccentric Culture” is perhaps his most famous work in English, wherein he dis­cusses the way Chris­tianity, Judaism, and Islam view and relate to the past.

“In his opinion, what has made the West great is the specif­i­cally Christian way of relating to the past as opposed to the Jewish and Muslim ways to relating to the past,” Lindley said. “He thinks the greatness of Chris­tianity is that it’s been able to appre­ciate the past on its own terms — that each culture from the past has some­thing to give as itself.” 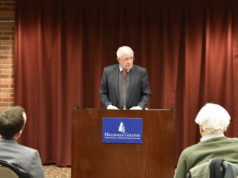