Ending her senior year with the NCAA Division II Cham­pi­onships, senior Anika Ellingson is now the sixth Hillsdale swimmer since 2014 to achieve All-American status, and her picture will now be show­cased in the Roche Sports Complex among the other All-Amer­icans.

“I don’t think I’ll be able to recreate that moment ever,” Ellingson said. “It’s still really surreal that I’m an All-American.”
Head coach Kurt Kirner said he felt good about Ellingson becoming an All-American while going into the events and it would’ve been more sur­prising if she didn’t win it. Her inde­pendent training pre­pared her for this meet, and with her men­tality and focus developed over the years, she was more than ready.

“We gave her so much control and she took all of the prepa­ration and made it into an indi­vidual per­for­mance objective for her,” Kirner said. “She was really good at doing all the right things and that built her con­fi­dence. We just helped along the way.”

For the last few weeks, Ellingson prac­ticed in the mornings as many times as pos­sible to adjust to the racing schedule. Swimming at race pace during her trainings helped her the most, which assisted with better turns and per­fecting the smaller details, Ellingson said.

“By the time I actually got to the race, my turns, my tempo, and my pullouts felt really good,” Ellingson said. “I went back to rewatch the livestream and I was like, ‘Wow, my under­water work is really paying off too,’ and every­thing just seemed to click in both events.”

When Ellingson first came onto the team, she hadn’t achieved much, Kirner said. But each year her per­for­mance con­tin­ually improved, mainly through her own efforts.

“It wasn’t like I gave her a special set of skills; it was just allowing her to work within her own capa­bility to become a better swimmer,” Kirner said. “It’s the self-respon­sible ath­letes that are intrin­si­cally moti­vated.”

Her com­mitment and ded­i­cation will be missed next year Kirner said, and those close to her under­stood how hard she worked. Through her efforts, Ellingson embraced the sport head-on, reflecting her strong value of the sport, and her example is one to follow.

“It wasn’t just some­thing to feed her ego, she intrin­si­cally embraced the idea and that’s what her team­mates need to do. They need that com­mitment level,” Kirner said. “You like to have ath­letes finish at the top and that’s what she did.”

Ellingson said she is grateful for the amount of freedom Kirner gives the team during prac­tices, allowing them take on more self-respon­si­bility and self-awareness. Since he only sees what happens on the surface, the team has to tell to Kirner if they feel some­thing is off, and Ellingson said this strong emphasis on com­mu­ni­cation helped her the most.

“He wants dia­logue between the coaches and swimmers,” Ellingson said. “He’s really good about trying to give back feedback and he won’t hover over you if you need to do work. The strong com­mu­ni­cation has helped me the most.”

As advice for her team­mates and swimmers in general, Ellingson said appre­ci­ating some­thing in the sport everyday helps with remem­bering why they’re swimming. It’s a love-hate sport, so it’s a process to learn how to have fun with it, and Ellingson thanks her team­mates’ support and pos­i­tivity for reminding her why she swam.

“I came into loving it, hit a big mental wall, and I had to learn again how to love it,” Ellingson said. “Find some­thing you love about it everyday and use that as your reason.” 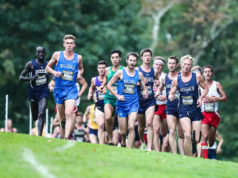