The Hillsdale College women’s track and field team was off to a strong start shortly after its founding in 1977, taking second place at the 1981outdoor track GLIAC Cham­pi­onship meet. A year later, however, the program was taken over by a 22-year old with no ath­letic expe­rience at the college level, other than her routine workouts in the sports complex.

Nev­er­theless, the Chargers’ momentum kept on rolling after the coaching tran­sition. In fact, they went on to win 16 con­sec­utive regional cham­pi­onships and 17 con­ference cham­pi­onships. This new coach with no expe­rience quickly earned the respect of her com­petitors, so much so that she won the GLIAC Coach of the Year award 20 times between the cross country, and indoor and outdoor track seasons. Beyond the con­ference, she was rec­og­nized at the national level. She coached pro­fes­sional teams for the United States and was even inducted into the NAIA Coaches’ Hall of Fame.

She was working out as she nor­mally did during her senior year at Hillsdale College when she was pro­vided with an unex­pected oppor­tunity.

“The ath­letic director, Jack McAvoy, came up to me and asked if I would be inter­ested in coaching,” she said. “I ran in high school, but I didn’t know hardly any­thing. The first year I was coaching my peers. Some of them were even my friends.”

After grad­u­ating in 1982, Philipp began her career as the new head coach of Hillsdale’s track and cross country team.

“It was still fairly in its infant stages, so we had nowhere to go but up in a sense,” she said. “We had a team of tal­ented runners. We just kind of grew.”

The key to growth was great recruiting. Despite being a young coach of a young program, she didn’t back down from recruiting the best.

“I wasn’t shy about recruiting elite ath­letes,” she said. “I went after anybody who won state cham­pi­onships. When we had kids choosing us over Big 10 schools, we could keep the momentum going.”

One year, Philipp recruited the Michigan state cham­pions of the 100m hurdles in all four divi­sions of high school track.

“We beat U of M with those four girls in the shuttle hurdle relay,” she said. “It made you feel con­fident that there was a lot of potential to do a lot of things.”

Her secret to recruiting?

“I just loved the school and told the story,” she said. “There’s a small part of me that thought ‘I’m going to change their life a little bit because they’re going to come to Hillsdale College.’”

Philipp’s goal in recruiting wasn’t only to get the best ath­letes, but also the most. She wanted a team with depth so when it came time for con­ference cham­pi­onships, she would have options.

“My strategy was to fill all the events,” she said. “Some­times two or three couldn’t score, but they were there, feeling it, watching it, and com­peting, and it gave them desire to get to the con­ference cham­pi­onship.”

One of Philipp’s favorite mem­ories comes from a girl who had that desire to compete.

“Debby had walked on, and it was her senior year,” Philipp said. “I needed someone in the 10k. Darned if she didn’t score. She got sixth. She scored a point and the whole team just erupted. She was the sweetest, greatest girl. That gave us momentum to do well for the whole meet.”

Philipp’s talent for recruiting wasn’t unno­ticed. Ed Car­leton — or “Coach C” as his many ath­letes called him during his 44 years of coaching high school track and cross country in Michigan — met Philipp when he decided to visit Hillsdale.

“When I met Diane, I had two girls two years in a row go to Hillsdale, and I had nothing to do with it,” Car­leton said. “When girl number three decided to go, I thought ‘It’s about time I go down to Hillsdale.’”

Car­leton liked what he saw when he first visited the college. He got on board with Philipp’s coaching and wanted to help her team, so he would talk to the girls he coached about going to Hillsdale.

“I just loved the school, it was just a great school,” he said. “I helped Diane recruit for the years she was involved. I thought she was a good coach and she did well. She had a knack with the girls and a knack for recruiting.”

The two became friends who still get together each spring at the Hillsdale Gina Relays.

“Coach C helped me a ton,” Philipp said. “Any kids in the Detroit area, he’d give me a call. We’d have fun trying to find freshmen that had potential, the two of us together.”

With great success in her years of college coaching, Philipp was asked to coach at the national level for the United States. She coached the Olympic Fes­tival Team in 1989, the women’s Ekiden Dis­tance team in 1990, the 1995 women’s World Cross Country team, and the women’s track and field team at the World Junior Cham­pi­onships in 1998.

“It was awesome, so much fun,” she said of the World Cross Country Cham­pi­onships. “I got to meet these incredibly elite ath­letes. It was kind of a whole new world for me. It was really just a bigger scale and there were a lot of unknowns. I wasn’t nervous, but I was excited.”

When Philipp arrived in Durham, England, with her team, their trans­portation to the course was delayed. They finally arrived to find a course gated off and guarded by security.

“I’m totally a rookie but we need to get on this course,” Philipp said. “I decided we’re going to ask for for­giveness instead of per­mission. We’re just going to go.”

And so her team jumped the fences so they could practice and preview the course before their upcoming race.

“We just kinda acted like we knew what we were doing. It was a little bit of a risk, but I had to let them on the course,” she said. “But they did really really well.”

Her team went on to finish fifth out of 30 inter­na­tional teams.

Philipp was inducted into the NAIA Coaches’ Hall of Fame in 1996 before retiring in 1999. She was the first female to be inducted, as well as the youngest hall-of-famer at that time.

The Hillsdale College pres­ident at the time, George Roche, wrote in a letter to Philipp pub­lished in the 1996 Hillsdale Alumni Mag­azine.

“The honor you received speaks volumes to your career as a coach, a teacher, a recruiter and ded­i­cated alumna of the school. Your stu­dents, their parents, your col­leagues and all of college ath­letics are learning a great deal from you about the rewards of self-dis­ci­pline, the meaning of lead­ership, and how genuine love of ath­letics is an invaluable part of a broad foun­dation for life. I have no doubt your talents will con­tinue to transform many lives.”

Roche’s faith in Philipp wasn’t mis­placed. After her retirement, she went to the Hillsdale Academy to help with the foun­dation of its ath­letic pro­grams. A year and a half later, Pres­ident of Hillsdale College, Larry Arnn invited her to assume the Dean of Women position, where her lessons as a coach translate to her new position as she con­tinues to impact the lives of her stu­dents.

“This job is very similar. It’s just that we’re not in a locker room, it’s an office instead,” she said. “Working one on one with stu­dents, keeping them focused, moti­vated, inspired, healthy, and happy so they can do well in school and the ath­letic field.” 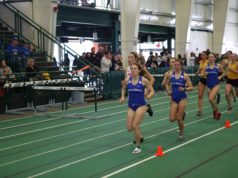 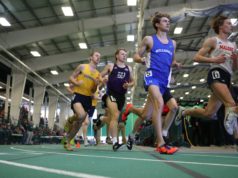