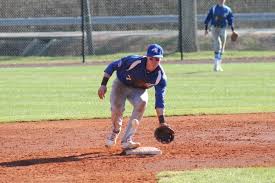 The Hillsdale College Chargers entered last weekend’s series against the Bel­larmine Uni­versity Knights with momentum. After a tough, two-game series, however, the Chargers return home looking for answers in all areas of the game.

Junior Andrew Ver­brugge took the hill for the Chargers in game one, but struggled to find his groove early. Ver­brugge allowed five runs on eight hits in just a little over three innings as Bel­larmine jumped out to an early lead. Through three starts, Ver­brugge has yet to record a win, holding a 0 – 2 record with a 8.79 earned run average.

Hillsdale’s pitching staff struggled to tame the Knights’ offensive fire­power all day. Junior Kolton Rominski also had troubles on the mound, giving up six runs and three home runs in just one inning. As a team, the Chargers allowed 17 hits in the first game, including six home runs.

Hillsdale was also stagnant offen­sively. The top of the lineup, which usually hits con­sis­tently well, failed to produce a run. Junior Jake Hoover and senior Steven Ring both failed to record a hit. Most of the Chargers offense came from junior Jacob DePillo, who homered in the third inning and singled in a run in the fifth.

Game two started on a stronger note, with Ring and senior Dylan Lot­tinville sparking Hillsdale’s offense for an early 2 – 0 lead.

Sophomore David Toth got the start for the Chargers but struggled to find the strike zone, allowing nine walks and four hits in five innings pitched. Even so, Hillsdale managed to stay in the game. After Bel­larmine scored three in the bottom of the first, Hoover tripled in a run in the top of the second to tie the game at three.

The Knights retook the lead in the bottom of the second, but after a pair of RBI doubles from sophomore James Krick and junior Dante Toppi, the Chargers held a 5 – 4 lead.

After Toth allowed two more runs in the fifth, senior Colin Boerst, back from injury, singled in a run to tie the game at six going into the bottom of the sixth.

That’s when the wheels fell off for Hillsdale. Bel­larmine took advantage of hit batters, a timely error, and two home runs to put ten runs across the plate, making the score 16 – 6 and putting the game out of reach. After the Chargers failed to score in the top of the seventh, the game was called.

Hillsdale has two series remaining before they begin G‑MAC play against the Uni­versity of Findlay in two weeks. The Chargers look to rebound this weekend with a four-game series against Dav­enport Uni­versity in Sauget, Illinois. Hillsdale will play dou­ble­headers on Sat­urday and Sunday, with games at 1 p.m. and 4 p.m. both days. On Tuesday, the Chargers play a dou­ble­header at Oakland City Uni­versity.

The Weekly: Lessons from this semester

The Weekly: Continue the pursuit of wisdom in the face of adversity