When she was getting ready to go to the Uni­versity of Michigan, Chair­woman of Art Barbara Bushey had a tough decision to make.

“I was trying to decide between art and physics,” Bushey said. “And as I told my father, ‘I can always paint on weekends, but I can’t have a cyclotron in my basement.’ I went into physics.”

Like many college stu­dents, Bushey ended up changing her major. And instead of physics, she earned a degree in psy­chology.

All her life, Bushey said she was making some­thing. It’s no sur­prise, then, that she went on to art school at Eastern Michigan Uni­versity a semester after grad­u­ating from UM. Bushey earned her Bachelor of Fine Arts in both graphic design and tex­tiles there, before moving onto Eastern Michigan Uni­versity for her Master of Fine Arts in tex­tiles.

During her time at graduate school, Bushey expe­ri­enced “the sort of mad sci­entist” aspect of art, real­izing that she could dye her own fabrics.

“I was working on this piece that had this kind of sandy-colored fabric, and then I needed more,” Bushey said. “I was able to dye more and get it to match exactly. And so I marched into my adviser’s office and said, ‘Look what I did, I want my degree now,’ and they go, ‘Yeah, now go back to work.’”

Rachael Reynolds ’18, who took every art class Bushey offers, said Bushey never com­pro­mises with any of her projects.

“She spends hours on these things,” Reynolds said. “I would never spend that much time on some­thing unless I was certain it would turn out amazing, and she makes sure that it does.”

After fin­ishing her graduate studies, Bushey decided to pursue a career in teaching, some­thing she’s been doing her whole life, as the oldest of five children.

She had begun teaching part time at many schools in south­eastern Michigan as an “itin­erant scholar,” but said she was looking for a change in pace. At the same time, Hillsdale College needed a full-time art pro­fessor for one year, and Bushey decided to apply for the position.

“They liked me, and I liked it here,” Bushey said. “They just kept putting me on the schedule. Finally, they decided they should keep me.”

Bushey said it was nice to finally have a place to call home.

“This place is so lovely because we have so much support from the admin­is­tration, we have such good stu­dents – people who want to learn – we have ded­i­cated faculty,” Bushey said. “My col­leagues are all com­mitted teachers and kind and gen­erous human beings, and just the whole atmos­phere of searching for the truth together is a real wonder.”

“When I first sat down with her to talk with her about poten­tially adding an art major, we got along really well,” Reynolds said. “She’s kinda goofy, but she’s also very straight­forward, and I very much liked that.”

Hillsdale’s art department made it pos­sible for Reynolds to stay a fifth year and pick up an art major. Reynolds said she con­siders having somebody like Bushey in her life one of the biggest blessings coming out of Hillsdale’s art program.

“My last semester, she was on sab­batical, and so I was like, ‘Oh my gosh, no. She can’t be on sab­batical my final semester,’” Reynolds said. “I didn’t see her as fre­quently, but she still carved out time to make sure that she was there for me through the grad school process, through the job search process, and even now, she’s ran­domly mailed me clothes that she thought I would like.”

During her time as a student, Reynolds said she went to Bushey for advice all of the time, even if it had nothing to do with school.

“That was huge for me in college,” Reynolds said. “She cared about me as a human.”

“She’s one of the first people I text to bounce off about my art stuff just because I know her advice will be unbiased, and I appre­ciate that,” Reynolds said. “She’s still helping me even though I don’t go to Hillsdale anymore.”

Around three months ago, Bushey told Reynolds she was going to make a quilt based off of Reynolds’ photo of White Sands National Mon­ument in New Mexico.

“I was like, ‘Oh my gosh, Barbara Bushey is making a quilt from my photo.’ I guess that made me sound like a four-year-old girl, but she had looked at some­thing I had made and was like, ‘Oh, I can get inspi­ration from that.’”

“It’s all the people who kind of come in, like, ‘Alright, alright, it’s a core requirement,’” Bushey said. “And then by the end of the semester, they’re like, ‘well, this was really inter­esting.’ And that’s always good.”

Leali said Bushey’s classes are refreshing because Bushey cares very much about art, but she cares more about her stu­dents.

“She’s the reason I love the Baroque Period as much as I do,” Leali said. “I took the Baroque class because I loved Renais­sance so much. It’s a really good way to just kind of get away from the strict and really hard classes for a little while, but then also still learn quite a bit of the dif­ferent periods.”

“She has a very quirky sense of humor that really lightens the mood,” Yacoubian said.

Yacoubian said Bushey has helped her to under­stand her own art better by offering many dif­ferent per­spec­tives when studying artists from the past.

“She helps you see the devel­opment of art and kind of makes sense of what you do as an artist and the purpose for cre­ating it,” Yacoubian said.

During her freshman year, Yacoubian took Bushey’s basic design class. Her favorite mem­ories with Bushey come from this class.

“There’s a quilt in Pro­fessor Bushey’s exhibit, and it has all the pic­tures of her in funky outfits,” Yacoubian siad. “She took those while I was in the design class. Maybe every day or every week, Rachael Reynolds would go out in the hallway and take a picture of her outfit. Now it’s fun because I get to see the quilts, and I remember her outfits.”

In addition to mem­o­rable classes, Yacoubian said she admires Bushey for how well she leads the art department at Hillsdale College.

“She con­tributes a lot, and I know she’s helped me a lot as a student,” Yacoubian said. “She really wants to do a lot for the school and that shows in her work.”

Leali, Yacoubian, and Reynolds all said Bushey is one of the most tal­ented people they have ever met.

“She’s amazing at what she does, but extremely humble,” Yacoubian said. “I think what makes her an excellent pro­fessor.”

Reynolds said she could not have found a more hard-working mentor.

“The things that she does with these quilts, it’s incredible,” Reynolds said. “I could gush about Barbara Bushey all day.” 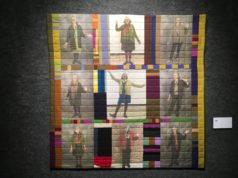 ‘You’ve got to know yourself’: Bushey sews quilts to self-examine, find inspiration 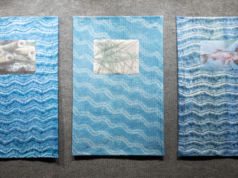 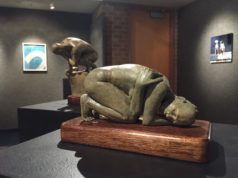 Alumni come home to the Dale for art exhibit