Armed with voices that can all carry lead vocals and years of musical study, Nashville band Sunset East is sweeping the alter­native rock scene with its unique sound and even more unique sit­u­ation.

Claiming the Eagles and Dave Matthews Band as inspi­ra­tions, Sunset East started as a house band in a bar in Nashville. Doyle and drummer Kyle Robert have been with the band since its began in 2017. Lead singer Ellen Hogan ’16 joined the band after it lost its pre­vious lead singer. According to Robert, Ellen “dec­i­mated” audi­tions for the band’s new lead vocalist and joined Sunset East in 2017.

Before joining the band, Hogan, who grew up in South­field, Michigan, said she moved to Nashville, Ten­nessee, in hopes of pur­suing music. She started with only a pub­lishing internship that fell through within her first few weeks in Nashville, however, and one friend, a Hillsdale con­nection who she was living with.

“We were in a band on campus called the Biting Goats,” Hogan explained. “Cecilia was from Nashville and her best friend from growing up, Nina, was in the music industry. Cecilia and I were pretty good friends, she said I should talk to Nina, and Nina and I became great friends, and roomed together. That con­nection wouldn’t have hap­pened without Cecelia. She was the only person I knew in Nashville. I went in blind. After the first two months, my internship fell through because they couldn’t afford to pay me. That was a little trau­matic because that was the reason I had moved here.”

Not long after, Hogan found out about Sunset East, though she said she didn’t think she was going to even get an audition.

“I had been trying to find more outlets to perform, or fill in, so I recorded some demos and started just sending them out to people who were looking,” she said. “Pretty soon after, I had that audition for Sunset East. They were harmony-driven, rock, — I thought it was too good to be true.”

While at Hillsdale, Hogan majored in clas­sical voice and minored in business. She said her time at the college pre­pared her well for a musical career.

Hogan said the business skills were more useful than many would assume.

“One thing people really don’t think about with a band is that we’re really a business. Were an LLC in the state Ten­nessee,” she said, laughing. “It’s really helped to know about business in that respect. This job really required me to have a rounded set of skills. We have a manager now, but starting out, we had to do every­thing our­selves — our own booking, our own PR, every­thing. All of those things have to come together in building a company, and then you add the per­forming aspect.”

The band has been touring around the eastern United States since 2017 at bars and brew­eries and more recently, fes­tivals.

“After the tour in Sep­tember 2017, we got com­fortable with each other, and they asked me to join the band, and so I offi­cially joined in October,” Hogan said. “After that we hit the ground running. We started booking as much as we could — all over. We’ve gone as far West as Louisiana and Arkansa, as far North and South as Mass­a­chu­setts and the Florida Keys.”

In Feb­ruary of 2019 the band released its first self-titled EP.

Com­prised of five original tracks, the album show­cases the band’s many talents. In addition to strong vocals and expert guitar-wielding, the band members’ talent for song­writing is apparent. Sunset East’s lyrics address life’s ups and downs with a refreshing authen­ticity.

“I’ll Get Along,” the first track on the album, dis­cusses missing a former flame. To convey the levels of love and longing, the band alludes to rock legends of yore: “I need you like Cobain needs his fix/Like the Stones, they need Mick.”

Robert said he wrote the song when he first started the band.

“Our old singer wanted to have ‘I love rock and roll’ in there some­where. Our old gui­tarist wanted ‘like an addict needs his fix’. I had already written the line ‘like Johnson needs his soul,’” Robert said. “I was at a ware­house, and I heard ‘Old Time Rock and Roll’ playing. I asked someone who wrote this song and he looked at me with a look and said, ‘That’s Bob Seger.’ I just had this moment of ‘Oh!’ and that’s where the rock ’n’ roll deal came from.”

Though Robert usually pro­vides the pre­lim­inary lyrics for songs — or “poems,” as he calls them — all three members are nec­essary to the band’s song­writing process. Once Robert has a workable poem, Doyle comes up with some form of chord structure, and Hogan writes a melody.

“We’re really slow writers,” Doyle said. “Once we get the bare bones of a song, we cut into it. Are the har­monies two-part or three-part? How can we change this up? The material can take weeks. One song took us months.”

Sunset East now has eight fully-written songs and a few more that the members are cur­rently working on. The band plans to con­tinue touring and hopes to sign with a record label.

As the band begins to blossom, Robert said the Hillsdale com­munity has been very sup­portive.

“The support from Hillsdale and Michigan in general has been astounding. Thank you to every fan, but espe­cially from Hillsdale,” he said.

Sunset East will be playing at the Hock­eytown Cafe in Detroit on April 4 and Patrick J’s in Berkely, Michigan on April 5. 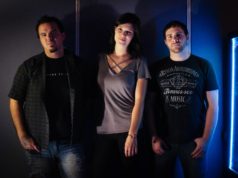