A Vir­ginia Tech research exper­iment sug­gests that last month’s polar vortex may have killed up to 95 percent of the stink bug pop­u­lation in Southern Michigan — but Hillsdale res­i­dents haven’t noted much in the way of change.

Hills­dalians are no strangers to the pesky stink bug. And while they are very familiar with scanning the window sills for any of the intruders, what they might not know is that stink bugs weren’t always a problem in Michigan — only recently were they acci­den­tally intro­duced to the envi­ronment.

The brown mar­morated stink bug, or “Haly­omorpha halys,” isn’t a species native to Michigan. This invasive species was brought to North America from Asia by accident in the late ’90s and was first found in Michigan in 2010.

Stink bugs are excellent at finding shelter. That’s why they can be found in almost every house, dorm, and apartment during the winter time.

And that’s also why this study is a bit mis­leading.

While 95 percent of the stink bugs that were unable to find shelter may have been killed off, the majority of them would have already found ade­quate winter shelter by the time the polar vortex struck. These stink bugs will leave their hiding places once warmer weather beckons them forth; so the res­i­dents of Hillsdale need not fret — they’ll be back to swatting these pests away as per what has become custom soon enough.

“It will take several cold winters in a row to erad­icate the outdoor pop­u­la­tions of stink bugs. Plus, being synan­thropic makes them extremely tol­erant of cold weather,” Houghton said.

A synan­thrope is a species that lives in close asso­ci­ation with and relies upon humans. Since stink bugs are synan­thropic, they are able to survive even the coldest of winters because of the access they have to arti­fi­cially heated envi­ron­ments, like houses.

Hillsdale’s off-campus res­i­dents report mixed expe­ri­ences with stink bugs in the aftermath of the polar vortex; some have noted a decrease while others claim nothing has changed.

Junior Fiona Kelly reports that her off-campus house has not had much of an issue with stink bugs this year before or after the polar vortex.

“The Womb is stink bug free,” Kelly said. “Which is pretty ironic because this place is old as heck and it wasn’t kept up for years before Reagan and I moved in.”

Senior Eliza Lewis, also an off-campus res­ident, has had no such luck.

“I have not seen a rapid decline since the polar vortex. In fact, I’ve seen an increase and I think they are taking shelter in my fan light bowl,” Lewis said. “They are living out of my room, I swear. The bowl where the light is in my fan has maybe 10 dead ones because they fly in and can’t escape. I hope they go extinct. They are an invasive species, and I hate them more than any­thing.”

While extinction doesn’t appear to be a pos­si­bility in the near future, rest assured there are other mea­sures that can be taken to help remove these pesky crea­tures.

Those hoping to once more study peace­fully in their homes — or dorms — without threat of bom­bardment by these pests can make what is called a light trap.

Take an alu­minum pan and fill it with an inch of water and add a bit of liquid dish detergent to it. Use a lamp to shine a light into the pan; the bugs, attracted to the light, will fall in and drown.

It looks like the res­i­dents of Hillsdale will have to put up with stink bugs for a while yet — so ready your exter­mi­nation method of choice, whether it be a light trap, a fly­swatter, or a slightly-more-coura­geous friend or roommate. 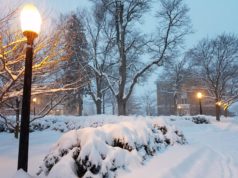 Too many snow days may force schools to lengthen academic year 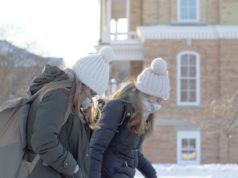