Last Sunday, Hillsdale College French stu­dents took their lan­guage skills outside the classroom and into the opera house thanks to Hillsdale’s French hon­orary, Pi Delta Phi.

Nineteen stu­dents and three pro­fessors spent the day in Toledo, Ohio where they saw “Carmen,” a 19th century French opera that tells the story of a naive soldier who is seduced by a gypsy named Carmen.

“The purpose of the trip was to give stu­dents the unique oppor­tunity to expe­rience an event unavailable on campus and show them that French culture is present, alive, and well,” Marie-Claire Morellec, chair of Hillsdale’s French Department and orga­nizer of the trip, said in an email.

Beyond gaining general cul­tural knowledge, however, Morellec added that seeing “Carmen” in par­ticular was espe­cially mean­ingful for some stu­dents.

“Several stu­dents had read the text on which the opera is based as part of their 19th century French lit­er­ature class,” she said. “It just so hap­pened that ‘Carmen’ was part of Toledo Opera’s program this year.”

For attendees like Soren Moody, a freshman majoring in French as a part of the inter­na­tional studies in business and foreign lan­guage degree, “Carmen” was their first encounter with opera.

Moody said he attended not just for the aca­demic enrichment but also for the musical aspect.

“Madame Morellec started talking about the trip way back in the fall, and I flipped out about it,” Moody said. “Ini­tially, that was because “Carmen” is part of French culture, and I’d never seen an opera. But then as the semester went on, I was in a voice class and my teacher brought out an operatic voice in me. This was an incredible oppor­tunity to see two of my favorite things, opera and French, come together at a pro­fes­sional level. How could I pass that up?”

Sophomore Joy Brower, a French and eco­nomics double major, said she appre­ciated the chance to broaden her under­standing of the lan­guage.

“The diction is very dif­ferent in an opera,” Brower said. “They put the emphasis on dif­ferent parts of the words. It was good expe­rience to hear how French is pro­nounced out of the context of normal con­ver­sation.”

While members of the hon­orary receive pri­ority, events are open to stu­dents in all classes.

“We would not be able to provide this oppor­tunity to our stu­dents but for a won­derful donor, Mrs. Christine Smith, who created a fund to honor the memory of her mother, Mrs. Cecile Frazier Smith,” Morellec said. “Thanks to her gen­erosity, we have been able to do this every year, some­times twice a year, for over a decade.”

Brower spoke highly of the trip and encouraged others to attend in the future.

“I think anyone inter­ested in French culture and lan­guage would def­i­nitely benefit from going to see ‘Carmen,’” she said. “It’s a great way to expe­rience the culture outside of the expe­rience you get in a classroom.” 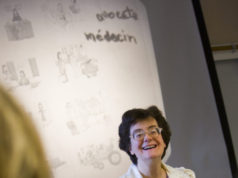