A lover of stories, senior Jordyn Pair has told many as a reporter for the Hillsdale College Col­legian. But this past summer, the new Col­legian asso­ciate editor’s byline appeared in the Ten­nessean, a Nashville-based paper part of the USA Today network, and her work  let her tell many inter­esting stories.

From writing about trash to cov­ering Nashville’s Pride Parade, Pair’s workload varied. She some­times worked mornings, some­times nights. And while her normal days were subdued, she fre­quently found herself on the front lines of the city’s action.

“I have really enjoyed cov­ering some of the protests in Nashville. I’ve been fol­lowing in the Poor People’s Cam­paign and it’s been inter­esting,” Pair said.

In addition to cov­ering the Poor People’s Cam­paign, she wrote about a protest against  Immi­gration and Customs Enforcement at the end of June, both of which she found were much dif­ferent from the Pride Parade she covered earlier in June.

“Protests are gen­erally more gru­eling than a fes­tival, because everyone is a little con­fronta­tional and amped up. They’re expecting some­thing to happen,” Pair said.

“It’s a really fun expe­rience because it’s high-energy and exciting, which is why people like to go,” Pair said. “I really got to look around and involve myself and pick out good pic­tures because I didn’t have to talk to anyone.”

These expe­ri­ences were the high­light of her summer, pro­viding excitement at almost every turn, but even in the office found success and excitement. Her cov­erage of a car accident in Nashville was picked up by Yahoo! News and was the number one story of the day.

For the 21-year-old, jour­nalism was the best way to pursue her ever-present passion for stories. And after first getting involved with it in high school, Pair hasn’t looked back and hopes to make jour­nalism her career.

“I absolutely want to do jour­nalism. I can’t imagine doing any­thing else,” Pair said.

Pair wrote in her per­sonal blog about life in Nashville. One story focused on what it was like to live alone.

“Being alone in a city has given me a chance to try new things unin­hibited,” Pair wrote.

Living alone for the first time, Pair used the time to learn to cook. Even in this regard, she came across some­thing unex­pected: her taste for stir-fried mush­rooms. 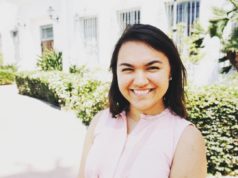