Jason Blake was driving his snow plow through a 13-inch snow­storm eight years ago when his blade hit a drain cover, bursting it so that it lifted his truck off the ground.

“Picture a 30,000-lb truck going 6 feet up in the air,” said Blake, who is the foreman for the City of Hillsdale. Though he’s been plowing for more than 12 years, Blake is always on guard in his single-axle plow truck, car­rying 14,000 pounds of salt-sand mixture.

Plow drivers turn their heads into “swivels,” as Blake describes it, as soon as they’re out on the road — con­stantly checking gauges, traffic, and their blade level, making what might seem to be a rote, grid-guided task an instinctual, intricate rhythm.

When a storm like last week’s is in the forecast, plow drivers in the City of Hillsdale and Hillsdale County gear up for long work weeks: The city drivers plowed for 32 hours more than usual last week, Blake said. City and county drivers worked about 12-hour shifts last week.

The city public service department’s game plan is reg­i­mented, though the kick-off time is as unpre­dictable as the weather — and might come with a 3 a.m. wake-up call. In what Public Ser­vices Director Jake Hammel describes as a “three-pronged attack” — con­sisting of four bigger plow trucks, two one-ton trucks, and a two-person shov­eling crew — the plow drivers chug through 48 miles of city road and 11 city parking lots, working sys­tem­at­i­cally from emer­gency routes to major roads to local streets to cul-de-sacs.

For the county road com­mission, the job is bigger: Foremen send out about 25 trucks, loaded with 11 – 12 tons of salt and sand, to plow 1,200 miles of road. Last week, plow drivers worked about 12 hours per day, said John Sanders, manager of the Hillsdale County Road Com­mission. The maximum they can typ­i­cally drive is 14 hours, Sanders said.

Plow trucks carry salt-and-sand mixes when tem­per­a­tures are below 20 degrees, Blake said; above 20, they carry just salt. Though cheaper to buy, sand actually costs the city more in the long run, clogging up drains that later have to be cleaned out, he said.

The city plowing oper­ation works on a rotating call system for emer­gencies, Hammel said. When the police department calls, the “on call” person works down through seniority to pull drivers into help. Though the work is tough, he said his drivers under­stand that they took the job to be of service.

“I’ve never had to mandatory anyone in,” he said.

Once on the road, drivers have to give the job intense attention.

“You’re here looking for railroad tracks, man­holes — if they’re raised up, they could damage the truck, rip the blade up — and where you put your mate­rials down,” Blake said. “We run into stuff people left on the road, mail­boxes, parked cars. At a stop sign or light, we have to raise our blade.”

The blade stretches 12 feet out past the edge of the truck and can spin the whole truck around if it nicks a railroad track, Hammel said.

Hills also pose problems: “A 30,000-lb truck doesn’t stop very well on an incline, espe­cially if it’s icy,” Blake said, noting that the hill at the end of Mechanic Road by Route 99 “always bothers me, no matter what.”

Cars parked on the side of the road make it hard to get in and out of parking spaces, Hammel said. Snow shoveled into the street also causes problems.

Blake said he’s adjusted to the sleep schedule, but for all his years of plowing, he never quite knows what a day’s job will involve. 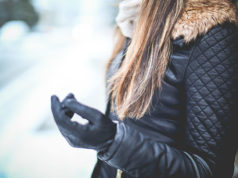