Clas­sical music fans of Hillsdale College are in for a treat this week. Pro­fessor Brad Blackham, pianist and director of key­board studies for the college, will perform three of Beethoven’s greatest pieces — the “Pathé­tique,” the “Tempest,” and the “Wald­stein” — at his upcoming solo piano recital.

An all-Beethoven recital is a first for Blackham. In many ways, the per­for­mance is a lifetime in the making.

“When I was younger, I never really felt like I got Beethoven,” he said in an email. “I had played plenty of his music, but I always felt like I wasn’t doing it justice. I’m finally to a point where I get it. I hit my 40s, and sud­denly I could see beyond the notes in the scores. All of the emotion and bits of Beethoven’s life that he poured into his music were much more visible to me.”

Blackham recalled the moment during his undergrad years that drove him to master Beethoven.

“My teacher heard a college student play a piano audition for a summer fes­tival and she said, ‘Wow, he played that Beethoven sonata like a 40-year-old,’” Blackham recounted.

Teacher of music Debra Wyse, a col­league of Blackham, said she will “absolutely” be attending the recital.

“You don’t often get to hear three Beethoven sonatas all in one per­for­mance,” she explained.  “Brad Blackham is an amazing musician, and I’m excited to see what he does with the pieces.”

Junior Sam Musser has been studying piano with Blackham since his freshman year. He said Blackham’s attention to detail will make his per­for­mance of Beethoven par­tic­u­larly out­standing.

“In Beethoven’s sonatas, every little note, rest, slur, and tie means some­thing,” said Musser. “Pro­fessor Blackham is very good at pulling out the little things and expanding on them. He under­stands how to get the most out of the piano.”

Musser added that the recital is a chance for people to get a deeper under­standing of Blackham’s musical ability.

“A car­i­cature of Pro­fessor Blackham is that his spe­cialty is con­tem­porary music simply because he’s extremely good at per­forming con­tem­porary music and 20th and 21st century clas­sical piano reper­toire,” said Musser. “This is a good oppor­tunity for them to see that his excel­lence in one area doesn’t detract from his excel­lence in another.”

As for Blackham, he hopes his audience sees his passion and admi­ration for Beethoven’s work through his per­for­mance.

“One of the best com­pli­ments that I can receive as an artist is when someone says that they heard me play some­thing in a com­pletely new way„” Blackham said. “My goal is to be able to convey how much I love these mas­ter­pieces, with the hope that everyone lis­tening finds that same enjoyment and maybe hears some­thing new.” 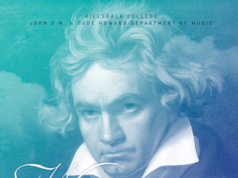 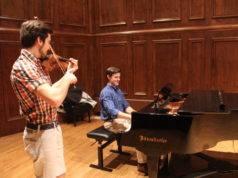 Artists among us: Taylor Flowers — Senior pianist, violinist, and singer has ‘a dual passion for teaching and collaboration’