A year and a half ago, junior Jackie Dupre left Hillsdale to travel the world.

After studying abroad in Germany between her sophomore and junior year, Dupre enrolled in Semester at Sea, a program that allows under­grad­uates to take college classes while trav­eling the world on a ship. Afterward, she decided to summer in Germany as well, making her stay a total of 14 months. During that time she visited 10 dif­ferent coun­tries and a total of four con­ti­nents.

An inter­na­tional business major, Dupre is fluent in German and is also a member of Pi Beta Phi. This past year and a half wasn’t the first time she had to make a major adjustment to a new lifestyle and com­munity, however. Her sophomore year, she trans­ferred to Hillsdale from Sacred Heart Uni­versity in Con­necticut.

“I’ve gone through freshman year so many times,” she says. “Every time you move, you have to find new friends and common interests.”

Dupre first approached the German department about studying abroad near the end of her first year at Hillsdale. The faculty pre­scribed an accel­erated program to prepare her for study in a foreign lan­guage, since at the time she was only in German 102, the second course in the college’s German program. Although faculty nor­mally require com­pletion of the second year lan­guage courses 201 and 202 to study abroad, they deemed Dupre “ready for the chal­lenge,” she said.

“It was won­derful having her as part of a fun Würzburg group in 2017, during the very first weeks of her German adven­tures,” Naumann said in an email. “She was extremely moti­vated to get the most out of her time abroad, and is now reaping those ben­efits in a mul­titude of ways.”

Dupre said going to Germany gave her the con­fi­dence that she was capable of living on her own in a foreign country, espe­cially after having to figure out things like health insurance.

“Out of everyone I had to talk to, none of them spoke English,” she said. “It was awful!”

The year abroad also gave her the oppor­tunity to meet new people from all over the world, like Nikolo from Flo­rence, or Sophie from Edin­burgh, or Kasia from Poland.

Last summer when Dupre was still in Germany, she met up with a group of friends from Hillsdale who hap­pened to be trav­eling through Europe — Senior Brooke Sabina, who was in Germany in between a Col­le­giate Scholars trip to Greece and the start to her summer semester at Oxford Uni­versity, and Sabina’s Chi Omega sister and Stables housemate, senior Shaylynn Schultz, who is also close friends with Dupre. The group had a wild time in Munich.

“The best part was swimming in the Isar river in the pouring rain,” Sabina said. “The water flows down from the Alps and runs very fast. We jumped in at the bridge and it carried us all the way down. It was one the best mem­ories of my entire life.”

From Germany, she also made a quick reunion with a friend in Ghana. Junior Fiona Kelly, who spent last semester helping teach schools in a rural village in the country, met Dupre in a nearby city during Dupre’s stop in the country during Semester at Sea.

“We stayed at a fancy hotel in Tacherati for a night because Fiona was having an awful expe­rience,” Dupre said. “The woman who was sup­posed to be queen of the village was in Italy until November. We caught up and sat by the pool for five hours. I fried! The African sun is mean!”

Trav­eling abroad has given Dupre a lot of oppor­tu­nities for building new friend­ships. Even at Hillsdale, Dupre seems to know people from all corners of campus.

“Starting over isn’t fun, but now I have friends every­where,” she says. “It’s amazing I’ve been able to meet so many people and not be stuck. You con­stantly get to find out who you are.” 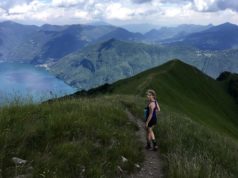 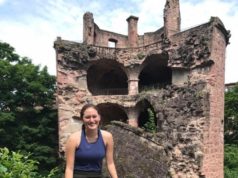