The warm, mean­dering melody from Leonard Bernstein’s “Mass” spills from the singer’s lips, filling the church sanc­tuary from wall to wall.

“Make it up as you go along

For Nick Nestorak ’11, “A Simple Song” was only the beginning of an inti­mately wor­shipful, yet also daunt­ingly tech­nical program of sacred music at Hillsdale First United Methodist Church this past Sunday. Nestorak col­lab­o­rated on the per­for­mance with college piano instructor Debbi Wyse and selected a large range of reli­gious reper­toire, from world-renowned clas­sical works of Bach, Mozart, and Schubert, to more familiar sacred hymns like “How Great Thou Art” and a con­tem­porary piece by Christian artist Michael W. Smith, “Shine on Us.”

Nestorak has focused on vocal devel­opment ever since his first lessons with vocal instructor Missy Osmond during his freshman year at Hillsdale. After attaining his master of music in voice from Uni­versity of Michigan, he now per­forms in various singing gigs across the country, in opera houses from Toledo, Ohio to Austin, Texas.

For Nestorak, per­for­mance involves both singing and acting. From his days at Hillsdale High School in which he per­formed a leading role in the comic opera “Pirates of Pen­zance” to his more recent leading role in “The Magic Flute” at the Toledo Opera, he often plays comic tenor buffo, or “char­acter tenor,” roles that allow him to offset the role of the lead per­former.

Though char­acter tenors often bear the brunt of col­legial jest due to the nature of their comic role in the opera, Nestorak says he enjoys having the oppor­tunity to shift between many dif­ferent roles.

“It’s about putting yourself in another character’s sit­u­ation and thinking, ‘How would I react to that?’ and to also bring the audience to feel what my char­acter feels,” he said.

Osmond said she rec­og­nized Nestorak’s excep­tional vocal talent near the beginning of his freshman year at Hillsdale. Prior to Sunday, she hadn’t heard Nestorak perform since his graduate school days.

“It took my breath away. I was in tears most of the time,” she said. “I was just feeling so blessed to have had four years to work with this man and help launch him to where he is now.”

Osmond added she would love to see Nestorak move into more romantic lead roles. Though romantic roles usually require a taller per­former, Osmond said Nestorak’s command of the stage and vocal talent are enough to propel him to the next level.

Though an actor by trade, Nestorak says he some­times has to refrain from too much dra­matic inter­pre­tation during par­tic­u­larly moving or inti­mately wor­shipful songs, or else he risks losing his com­posure, as he did while rehearsing “Shine on Us” before Sunday’s concert.

“If I’d put too much into it, I would have had a hard time getting through it,” he said. “I would have looked around the room and would have been crying.”

Nestorak remembers one par­tic­u­larly emo­tional moment he expe­ri­enced while playing the role of George in the opera “Our Town” by Ned Rorem. George gets married in one scene, but in the scene imme­di­ately fol­lowing, he must carry his deceased wife to the same mar­riage table, which has now become a funeral altar.

“It brought me back to my grandmother’s funeral in which I was a pall­bearer,” Nestorak said. “During the rehearsal I had to let myself have it so I wouldn’t totally lose it during the per­for­mance. I can’t sing through crying.”

Hillsdale res­ident Georgia Bentley, who has attended Nestorak’s per­for­mances since high school, including a per­for­mance at the Toledo Opera House, said she appre­ciates the clarity of intention in his singing.

“He’s good at becoming whatever he’s singing, and he seems to under­stand whatever the com­poser is feeling,” she said.

Perhaps one of the most moving moments in the Sunday per­for­mance was the dra­matic staging of “O Thou, in Whose Presence,” in which Nestorak turned away from the audience for an entire verse, facing the altar. His pro­jection remained clear and vivid, and all eyes turned to the golden cross standing behind the altar.

“It’s really nice to connect with the text when it’s some­thing you absolutely believe in,” Nestorak said, “and when you have a loftier goal of pleasing God and also touching people in the audience.” 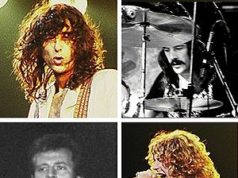 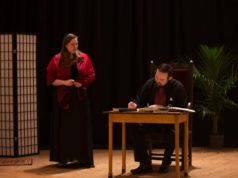 Opera, English essays, and the arts: Music makes the life of the mind melodious 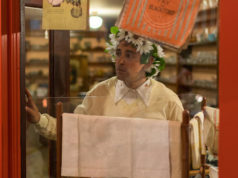