The Hillsdale College Chargers couldn’t hold on to a nine-point halftime lead on Sat­urday in a 76 – 65 loss to the Ohio Dominican Uni­versity Pan­thers. The defeat leaves Hillsdale at 8 – 8 on the season and 6 – 4 in a crowded G‑MAC con­ference.

The Chargers led the Pan­thers at halftime, 38 – 29, after shooting 47 percent from the field in the first two quarters. But Hillsdale shot just 8‑for-31 as a team in the final two quarters and was outscored by Ohio Dominican 47 – 27 in the second half.

“We kind of had some defensive slips, and then it led to trying super hard offen­sively and maybe we got a little rushed, and so both ends then got rushed,” head coach Matt Fritsche said. “I needed to help us be more struc­tured and keep us more under control than what I did.”

The Pan­thers also hit some big shots in the fourth quarter, including five of their total 10 three-pointers.

“It kind of turned into their game,” senior forward Brittany Gray said. “We got a little relaxed and they crept back up on us and even­tually hit some big shots. We kind of crumbled a little bit toward the end.”

The Chargers, who are second in the G‑MAC in total rebounding and out-rebound oppo­nents by an average of 5.5 rebounds per game, were out-rebounded by the Pan­thers, 39 – 35. Since Hillsdale shot just 26 percent from the floor in the second half, losing the rebounding battle was critical in allowing the Pan­thers to turn a nine-point halftime deficit into an 11-point victory.

Aside from crashing the glass for rebounds, Burger said com­mu­ni­cation and mutual trust on defense would be key to pre­venting oppo­nents from putting together scoring runs in the future.

“Right now, everyone on the team is such a great player that we’re trusting our­selves to do things well, but I’d like to see us trusting everyone around us,” Burger said.

Senior forward Makenna Ott scored 16 points and leads the team in total scoring and shooting per­centage this season. Ott has started in all 16 games this season and has scored fewer than 12 points in only four of them.

Senior guard Allie Dewire added eight points and eight assists. Dewire leads the team with 13.2 points per game this season. She scored her 1,000th career point at Hillsdale on her birthday, Jan. 10, in a win against Ohio Valley Uni­versity.

In addition to Ott and Dewire, Gray also averages more than 12 points per game. Hillsdale is the only team in the G‑MAC with three players who average that many points each game.

“Our team is so diverse that everybody kind of has their peaks,” Gray said. “Someone will have a good game one night, and another game another person will. Anybody can have a good game any night.”

Freshman forward Anna LoMonaco, who missed the team’s first 12 games because of a foot injury, scored a season-high seven points off the bench in 14 minutes. She also grabbed five rebounds.

Fritsche said LoMonaco has strong potential to become a solid forward at the four position as the season and her career pro­gresses, but for now she will be seeing action on the the floor as a center at the five position.

“I think we have that potential,” Fritsche said of his team’s ability to repeat the second-half success of last season. “I’m cau­tiously opti­mistic that we’ll do it, but I also know that last year to get to that place we had to put in a lot of work.”
Hillsdale sits in sixth place in the G‑MAC standings, but only two and a half games behind first-place Cedarville Uni­versity. With 12 games remaining in the regular season — all against G‑MAC oppo­nents — the Chargers still have plenty of time to better position them­selves for the G‑MAC tour­nament in March.

On Sat­urday, the Chargers travel to the Uni­versity of Findlay for an 11:00 a.m. matchup. The Oilers are 11 – 4 and 7 – 3 in the con­ference this season, so a victory for Hillsdale would be a step in the right direction in the battle to the top of the G‑MAC.

The Chargers lost on the road to Findlay last season, 81 – 55, but also beat the Oilers twice, once at home and once at a neutral site in the G‑MAC tour­nament. This is Hillsdale’s first game against Findlay this season.

“The goal is to knock off those teams that are ahead of us,” Burger said. “I think we’re going to be very pre­pared because we have all week to prepare for Findlay, and that’s going to be ben­e­ficial.” 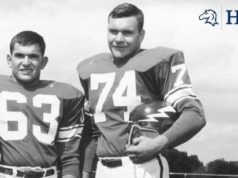