This story has been updated to include more current infor­mation.

Cold weather caused a pipe to burst in the entryway of the Grewcock Student Union Monday around 11 a.m.

Water flooded the union entrance near Mossey Library, causing stu­dents to have to use the back entrance. Main­te­nance workers imme­di­ately began clearing the water from the doorway. Water was also seen in a down­stairs main­te­nance room.

“I was in the room when it started flooding, so I got pretty wet,” junior Jake Sievers said in a Facebook message. “I don’t know if anyone else got spilled on. As soon as I went through the doors, I pulled out my phone and started recording and that’s when the fire alarm went off.”

The drop in pressure caused by the cold weather caused a pipe within the emer­gency sprinkler system to burst and water to pour from the ceiling, according to Asso­ciate Director of Security Joey Kellam.

With the abun­dance of cold air in the high traffic area, the heating system just couldn’t keep up, Kellam added.

The accident set off the fire alarm system, causing stu­dents and staff inside the Knorr Family Dining Hall to evacuate the building. Stu­dents waited outside for about ten minutes, according to Bon Appétit Man­agement Company employee Liz Maynard, until they were let in through the back entrance.

“I was in Saga grabbing a table when the alarms started going off,” sophomore Dennis Fassett said in a Facebook message. “We all thought it was just a drill because it always is, but even­tually people started clearing out and we left too. I went to grab my coat and bag in A.J.’s and saw the water and part of the ceiling fall from that area.”

Stu­dents were able to access the dining hall through the down­stairs entrance until main­te­nance fixed resulting heating and water issues later Monday afternoon. 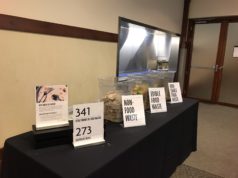 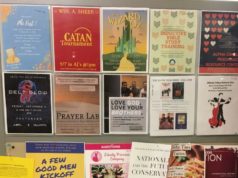