Phillips Audi­torium is the latest campus facility to receive an upgrade, but it’s not only Phillips’ structure that’s changing. The facility’s name will offi­cially be changed to Plaster Audi­torium once the ren­o­vation project is fin­ished.

The Phillips project had been in planning stages for five years before the college began demo­lition in late June 2018, Chief Admin­is­trative Officer Rich Péwé said. The Phillips Audi­torium recon­struction is the second phase of the college’s plan to revamp the Knorr Student Center.

“Think of it as a new building just in the old location,” he said. “That’s what we did with the Searle Center, too. We tore it all apart, but it was the right location. We don’t want to build some­thing sep­arate, away from all the activity. We want it to be useful for everybody.”

When the project is com­pleted in early August, the name will change to the Plaster Audi­torium. The Plaster Foun­dation has donated a fair amount of funds for the project. College Pres­ident J. Donald Phillips, for whom Phillips Audi­torium was named, will be com­mem­o­rated with a plaque and bust in the lobby of Searle. Though there have been a few set­backs, Péwé said he believes the audi­torium will be fin­ished on time and on budget.

“The thing that slowed the process down was you have as-built drawings that go back to the late 60s,” he said. “Until you tear it all out and see what’s there, some­times there’s sur­prises. We had to go back and do some addi­tional struc­tural fig­uring.”

Péwé cited an increase in campus vis­itors for CCAs and speaker pro­grams and out­dated equipment as reasons for the recon­struction.

“Most of those speaker pro­grams draw a bigger crowd than Phillips can accom­modate, Péwé said. “It doesn’t really benefit us to have 700 – 800-seat dining venue and an audi­torium that’s too small. Plus, it’s out­dated.”

The new audi­torium will seat 700, with 500 seats in the main space and 200 in the balcony. It’s double the size of any other audi­torium on campus; the next largest, Markle Audi­torium, seats 350. Director of Pro­grams for External Affairs Matthew Bell said the CCAs draw crowds of up to 500 guests. Once con­struction is com­pleted, all CCA lec­tures will be given in the audi­torium.

“The current format is just a tem­porary measure, and we thank everyone involved for their help­fulness in making CCAs a success,” Bell said in an email.

Plaster Audi­torium will hold dif­ferent events other than CCAs. Pro­fessor of Music James Holleman said he is excited to use Plaster for a variety of music events including jazz con­certs.

“Dan Buskirk and Rockford Con­struction gave a gen­erous donation to re-build the 7ft Baldwin Grand Piano that has been in Phillips Audi­torium for years, as well as funds to pur­chase sound equipment for the audi­torium. Once com­pletely re-built, the piano will be a beau­tiful instrument once again,” Holleman said. 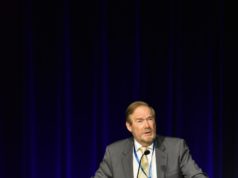 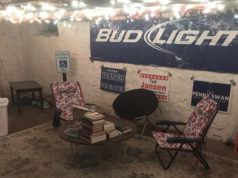