Radio Free Hillsdale may add to its growing col­lection of awards with the announcement of the Inter­col­le­giate Broad­casting System Awards finalists. Eight shows were named as finalists for the awards, all in dif­ferent categories.

The indi­vidual radio sta­tions are respon­sible for sub­mitting their work to the ISB panel for reviews. Finalists in each cat­egory are from the top 10 percent of their cat­egory. The winners of the awards will be announced as finalists in March at the annual IBS Inter­na­tional Con­ference in New York City.

“We’re com­patible to sta­tions and pro­grams that have been in the IBS awards for years,” said Scot Bertram, general manager of the radio station. “It’s an indi­cation of how serious the stu­dents take their craft and how good they’ve become in such a short amount of time.”

The finalists could have broad­casted at any point in 2018, and some finalists have since grad­uated. Sarah Schutte and Chandler Lasch, both class of 2018, are finalists in the Best Spe­cialty Show and Best Show Pro­mo­tional Poster cat­e­gories for their program “Wait, What Hap­pened?”. Citizen Talk, hosted by graduate stu­dents Juan Davalos and Lynette Grundvig, is a finalist for Best Public Affairs Program. Junior Ben­jamin Diet­derich is a finalist for two cat­e­gories for his inter­views with Ben Shapiro and John Bolton. “Miss Informed,” which is hosted by junior Kiara Freeman and sophomore Isabella Redjai and pro­duced by senior Jordyn Pair, is a finalist for Best Talk Program.

“It’s a very well-pro­duced show,” Bertram said about Miss Informed. “There’s been a lot of planning and format over the last two years. They really work at the craft.”

Freeman has been hosting the show since its debut episode two years ago.

“This is only our second year,” she said. “I never thought talking about these stupid things that we’re just having fun with is some­thing that people would really enjoy. It’s funny that people responded well to just me talking.”

Senior and WRFH Sports Director Cole McNeely played a role in both broad­casts named as finalists for the awards. His and junior Martin Petersen’s broadcast of Hillsdale Academy vs Bellevue is a finalist for Best Men’s Bas­ketball Play-by-Play, and his and Tyler Creager’s ‘18 Hillsdale College vs. Findlay broadcast was nom­i­nated for Best Baseball/Softball Play-by Play. McNeely said it’s good to see his team’s hard work pay off.

“We’re calling baseball game out­doors in Michigan in early March and April. It’s not always fun. We’re in mid-30 degree weather,” he said. “Having some recog­nition for the effort we put into that is a good thing.” 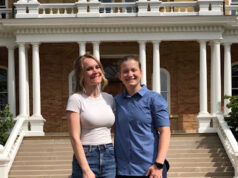 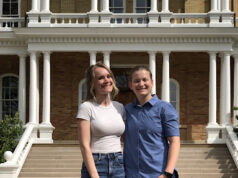 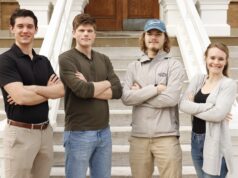