The dis­tinctly mas­culine and unmis­takably college-like aroma of pulled pork and mac ‘n’ cheese fills the air as a group of 40 brothers hustle in and out of the Alpha Tau Omega fra­ternity dining room, set­tling in for a few moments of fra­ternal bonding time before suc­cumbing to the con­flicting respon­si­bil­ities of college life. As of this semester, the fraternity’s new cook, Wayne Babcock, is the one who makes it all possible.

“It might not seem like a big deal, but the quality time spent in the house by the chapter increases sub­stan­tially when there’s just food there,” said senior and ATO member Marcus Kop­erski regarding the new ATO meal plan.

After a year of eating meals at the back circle table behind the fire­place in Bon Appétit, ATO once again has an in-house meal plan due to the addition of their new cook.

“Everyone was thrilled,” Kop­erski said. “We had been waiting a little while to pick up a cook, but the wait was def­i­nitely worth it.”

Babcock, founder and former owner of three Jonesville restau­rants, Olivia’s Chop House, Saucy Dog’s Bar­beque, and Chicago Water Grill, has decided to leave the restaurant business and take up the task of cooking dinner for a group of 18 to 22-year-olds. Babcock said he is able to utilize some of the nec­essary skills from his restaurant expe­rience with his new position, par­tic­u­larly menu planning and budgeting.

Dean of Men Aaron Petersen was shocked when Babcock, with his expe­rience, reached out with interest of working with ATO. Babcock had the option of retiring or opening more restau­rants in the area, but was imme­di­ately inter­ested in working for the college after his mother, Barbara Babcock, men­tioned the position.

Babcock’s two kids, Ethan, 6, and Olivia, 8 — the inspi­ration behind Olivia’s Chop House — are a big reason why he took the position, in addition to the prox­imity. After growing up in Hillsdale and grad­u­ating from Hillsdale High School, Babcock cur­rently resides in Jonesville, making it a short ride to work.

The hiring process even­tually included junior and ATO Pres­ident Reagan Wardie around the time of final exams last semester. Wardie said it had been a long time in the works, having gone without a cook since the last one left at the end of fall semester of 2017.

“We had gotten a couple leads since then but they fell through,” Wardie said. “Then Dean Pete reached out at the end of last semester and had hired him like two seconds before I met with him actually.”

The current meal plan con­sists of four options, the same number that Bon Appétit offers, and at the same price. All the plans include dinner at the ATO house each week night, but they vary in the amount of meals they offer outside of the house. The 11 block meal plan is equiv­alent to five meals a week in Bon Appetit, the 150 block is 10 meals, and the 19 a week or 200 block plans offer 15 addi­tional meals. All members of ATO are required to be on the meal plan.

Aside from the actual meals, the members have left­overs  and snacks kept in the house, which Babcock buys for them mostly based off what he thinks they would like.

“One guy said ‘give us carbs and protein and we will be happy,’” Babcock said. “And they are.”

Based off his weekly budget, pro­vided by the dean’s office, Babcock first gets all the nec­essary food for the meals, empha­sizing good quality foods, and then buys snacks with whatever is leftover. Although he leaves work Friday with what may seem like a stocked cabinet, he said he always returns Monday to a com­pletely empty kitchen.

When it comes to Babcock’s per­for­mance, members of ATO didn’t hes­itate to sing his praises.

“He is very orga­nized and extremely good at his job,” Wardie said.

Wardie described their expec­ta­tions of cleaning up after Babcock did the cooking, but said that Babcock chooses to clean all his own dishes, going beyond their expectations.

“He even has an appe­tizer some­times,” Wardie added.

Babcock’s typical work day starts at 1pm and ends when he serves dinner at 5:30. ATO members float in and out due to dif­ferent work or com­mit­ments during that time.

“He def­i­nitely seems like he under­stands the day-to-day hustle and bustle around here and he just wants to make sure food is some­thing we don’t really worry that much about — instead some­thing to look forward to,” Kop­erski said.

Babcock said as soon as some of the guys get home from class they begin to look around for snacks and, depending on what’s available, he tries his best to make what they want. But it can be a challenge.

Two members, seniors Marcus Kop­erski and Jacob Broussard, work on the kitchen crew, cleaning up the area and washing only the dishes they used to eat. But the process isn’t com­plete yet.

“The time com­mitment for two guys is between one and two hours a night,” Kop­erski said. “That can vary though because some meals take a lot of time to cleanup after, others not so much, some­times one of the guys who was sup­posed to help clean has some­thing come up and it’s all up to one person.”

Wardie said that, for right now, Kop­erski and Broussard are the only two on kitchen crew, but he hopes that will be changing soon.

In terms of the menu, Babcock has his recipes that he used for his restaurants.

“Basi­cally the guys said ‘whatever you want to make, we’re happy with,’” he said. “I crafted the entire menus [for Saucy Dog’s Bar­beque and Olivia’s] myself, built them, owned them, operated them.”

The members of ATO seem to be fully sat­isfied with Babcock’s creations.

“The best meals are the original recipes the cook makes,” Kop­erski said. “He started both Saucy Dogs BBQ and Olivia’s so he knows what he’s about. I won’t lie, the pulled pork and mac ‘n’ cheese was a hit.”

“40 pounds of spaghetti last night. There’s not a scrap left,” he said. “A pound a piece, plus breadsticks.”

In looking forward, Babcock said he would like to see all four fraternity’s on meal plans. In talking with Dean Peterson, he said there’s a pos­si­bility for a future joint meal plan, although nothing is cur­rently in the works.

“I have ambi­tions to be more involved in Hillsdale College going forward,” Babcock said.

“They gave me the budget and said to just keep the guys happy,” Babcock said. “That’ll be easy.” 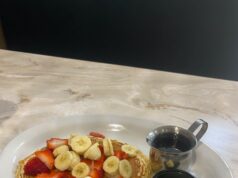 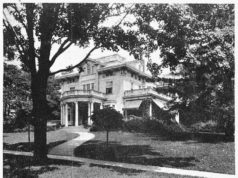 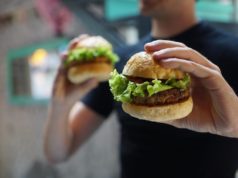