Brendan Noble ’18 has always been down for a chal­lenge.

As a first semester freshman in an inter­me­diate-level eco­nomics class — a class which Assistant Pro­fessor of Eco­nomics Michael Clark said “many juniors who take it fear” — Noble walked away with one of the best grades in the class.

“When I warned him to poten­tially recon­sider taking the class he just accepted the chal­lenge as an intel­lectual adventure,” Clark said.

His latest adventure, since grad­u­ating in May, is to self-publish a young adult dystopian novel, set in a socialist, futur­istic America.

Noble, who grad­uated last May with a major in eco­nomics and a minor in German, was known to spend a lot of his spare time studying and dis­cussing pol­itics. After working on several cam­paigns in the past years, including Justin Amash for Con­gress in 2018, Noble cur­rently works as a data con­sultant for Amash. He decided to write the book in his spare time last November, and has not looked back.

When asked if his expe­rience in American pol­itics helped in the writing of the dystopian novel, Noble laughed.

“I knew you were going to ask that question,” he said. “I’ve worked in pol­itics for at least 10 years now. You can talk to anybody who knew me at Hillsdale, pol­itics is my hobby … But the main driving point is the rela­tionship between the two main char­acters: The political system is more of the back­ground for that.”

“The Frac­tured Prism” is a story about a young man in a futur­istic America, 99 years after a fic­tional third American civil war, in the Twin Cities, Min­nesota. The man works with oper­ators who try to over­throw the gov­ernment, and winds up becoming allies with a former princess.

“In northern Mis­sis­sippi, you have socialists who are revolting against the monar­chists,” Noble said, explaining the book’s complex political system which he designed to be unique from any other system he has studied. “There’s a Prism system which splits people into color-classes based on their loyalty and their use­fulness.”

Though fiction-writing seems unlikely for an eco­nomics major, Noble said he had had the ideas for this story for a while.

“I’d always wanted to write a book,” he added. “So I decided, I have the time, I’m out in Grand Rapids working on the cam­paign, and I thought, why not just write it? Then my fiancee Andrea told me about this thing called National Novel Writing Month.”

National Novel Writing Month, an online com­pe­tition also known as “NaNoWriMo,” has gained a lot of recog­nition with up-and-coming writers since its beginning in 1999, and boasted 394,507 par­tic­i­pants from 646 dif­ferent regions in 2017. The chal­lenge: Write a 50,000-word novel in the month of November, or just under 2,000 words every day.

Noble wrote the first full draft of “The Frac­tured Prism” in November of 2018 for NaNoWriMo. After the chal­lenge ended, he imme­di­ately tran­si­tioned to editing, and within three months, with the addition of some massive changes and with a final man­u­script of some 77,000 words, will be releasing the book through Amazon self-pub­lishing on Feb. 15, as both a soft­cover and an ebook.

“I don’t have a ton of money to put into the book; lots of people hire editors, but almost all the editing has been done by me,” Noble said. “I’ve probably read the book 50 to 75 times at this point.”

“Brendan’s never been afraid to admit what he does not know and then seek answers to those gaps on his own,” Clark said. “Even more impressive, he’s always been willing to stay humble and retain some gaps.”

Those who knew him from Hillsdale said they had no idea Noble was writing a book, but most were not sur­prised. Noble always pursued a wide variety of hobbies outside of his major, and outside of political jobs, including doing lighting and pro­duction design for the theatre department, and becoming a member of the theatre hon­orary, Alpha Si Omega.

Michael Beyer, Lighting Designer and Pro­duction Manager for Theatre Department, who employed Noble for three of his years on campus, said he did not hear about the book until a couple of weeks ago.

“It is some­thing that I’m sure he would do, though,” Beyer said. “He liked to talk about smart things, and I’m sure he had plenty of con­spiracy the­ories up in his little brain that he wanted to put on paper, so it doesn’t sur­prise me at all, in that sense, but I had no clue he was doing it. I guess he’s modest and humble about it. He probably thinks it’s no big deal.”

In addition to his own work on the book, Noble’s fiancee Andrea Wallace ’18, as well as several of his family members, have lent their eyes and opinions to the various drafts. Noble said he also uses a lot of online resources as he learns how to nav­igate the process of self-pub­lishing, and to weigh his options.

“What’s actually been extremely helpful is a group I found on Reddit,” he said. “They share instruc­tions on how to self-publish, or the pros and cons of self-pub­lishing versus tra­di­tional pub­lishing.”

Going back and revising has been dif­ficult, but the reward was finally holding a proof copy for the first time. 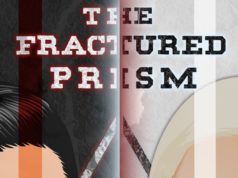 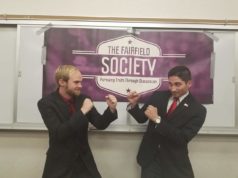