Stu­dents from Hillsdale College recently returned from an all-expenses-paid trip to Wash­ington, D.C. for the First Liberty Fel­lowship, a program that seeks to inspire and equip young people to be advo­cates for reli­gious freedom.

The fel­lowship is a project of the First Liberty Institute, the largest reli­gious liberty legal orga­ni­zation in the nation. As fellows, stu­dents spent five days attending lec­tures, inter­acting with reli­gious liberty experts and lawyers, meeting donors, and net­working with stu­dents from across the country.

Senior Katarina Bradford was the first Hillsdale student to take part in the fel­lowship back in 2016 and quickly became a recruitment ambas­sador. Since then, Hillsdale has sent a con­tingent of stu­dents every year. Despite this being the fellowship’s most com­pet­itive year yet, Hills­dalians accounted for six out of the 16 fellows: juniors Ade­laide Holmes, Hadiah Ritchey, Mason Aberle and Lukas Swenson, sophomore Dan Grif­ferty, and senior Rachel Fredrick.

Holmes, a pol­itics major, said her interest in reli­gious liberty inspired her to apply for the fel­lowship. During the summer between her freshman and sophomore year of college, she learned of a Christian couple who owned a farm in Michigan and part­nered with the state to teach under­priv­i­leged women how to make a living off the land. However, when the Department of Agri­culture dis­covered that the farm was incor­po­rating prayer and bib­lical teaching into the cur­riculum, it stripped them of their state charter, demanded the pass­words to their social media sites, and charged them with a fine. Holmes said she was incensed.

“I was mad that these people didn’t have justice,” she said. “That showed me I was really pas­sionate about reli­gious freedom, and I realized it was some­thing I should look into more deeply.”

When Holmes heard about the fel­lowship from Bradford, she knew she had to apply.

This year’s con­ference kept stu­dents busy from 8 a.m. until after 10 p.m., and crammed in 11 lec­tures from Wednesday through Sat­urday. The speaker lineup included Ryan T. Anderson of the Her­itage Foun­dation, con­ser­v­ative com­men­tator and pod­caster Allie Stuckey, and Eastern Uni­versity phi­losophy pro­fessor R. J. Snell. Hillsdale’s Matthew Spalding, asso­ciate vice pres­ident of the Alan P. Kirby Jr. Center for Con­sti­tu­tional Studies in D.C., and Nathan Schlueter, pro­fessor of phi­losophy and religion, were also fea­tured. Schlueter received his Ph.D. in pol­itics and con­siders political phi­losophy to be his area of expertise. His interest in the inter­section of these three fields inspired the lecture he gave during the program.

“My topic was about why reli­gious liberty is the first liberty,” Schlueter said. “I walked stu­dents through a history of reli­gious liberty and broke it down into several key moments. We kind of assume that it’s a basic liberty that’s always been there and that’s mapped onto human nature and that every decent political regime will protect it. But the fact is that it had to be won out through a lot of stress and strain and its achievement was actually very late.”

In addition to attending lec­tures, fellows had the oppor­tunity to explore the nation’s capital.

“I think First Liberty did a really good job of bal­ancing learning with fun,” said Ritchey. “Our hotel was within walking dis­tance of the National Mall. We went on a Segway tour of D.C, had a private tour of the Capitol, got to go to the Museum of the Bible, ate at the Trump Hotel, and had free time to explore on Sat­urday night.”

Attendees said the program not only allowed them to learn more about reli­gious liberty but also to refine their future goals. Swenson, an eco­nomics major, spent this past summer interning with the Min­nesota Family Council where he worked on the policy side of reli­gious freedom. He said he appre­ciated the oppor­tunity First Liberty offered to view the issue from a legal per­spective as well.

“In terms of career plans, First Liberty expanded my horizons a bit,” Swenson said. “Since the fel­lowship, I would say I’m more likely to con­sider going to law school or doing some­thing in the legal field, either for a non-profit advocacy group like Min­nesota Family Council or perhaps for First Liberty.”

“Reli­gious liberty is an issue that I’d been per­sonally inter­ested in but wasn’t really the route I’d con­sidered going with, mainly because it’s pretty hard to make a career out of one issue,” she said. “If I did end up going to law school, I was hoping to work for a more general firm, but First Liberty was a really cool oppor­tunity to see the pos­si­bil­ities of working as a non­profit lawyer.”

Swenson rec­om­mends that anyone with an interest in law or pol­itics or who con­siders them­selves reli­gious should apply for next year’s program.

“It was cer­tainly a valuable expe­rience to be able to spend time with like-minded indi­viduals, deepen our under­standing of reli­gious liberty, and be encouraged,” he said. “There is value in standing up for what is true and reli­gious liberty is the defense of truth.” 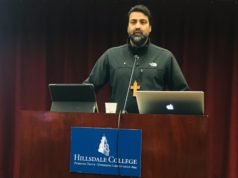